Beginning April 4th MetroStage will present Be Careful! The Sharks Will Eat You! – the compelling tale of one family’s escape from Cuba. The one-man drama is written, directed and performed by Jay Alvarez whose parents crossed the 90 treacherous miles across the Straits of Florida by boat to Florida’s shores in 1964, five years after Castro came to power.

Once a glamorous island destination, where socialites and celebrities frolicked in glittering nightclubs and casinos and where headliners from around the world entertained both the famous and the infamous, the island became a communist outpost, riddled with poverty. Landowners were stripped of their property, and those who could, fled, making their way – mostly in rickety boats – to freedom in America. The show has been playing to sold out audiences in New York and is currently under development as a musical. I spoke to Alvarez by phone to learn about the process of writing his play.

Jordan: How old were your parents when they left Cuba?

Jay: They were forty and I was around five. My brothers and sisters were here already. They had already taken the “Peter Pan” flights. [Code name for the Catholic-sponsored CIA project of “freedom flights” that brought over 14,000 children from Cuba to Miami – days before regular direct flights were cancelled]. My father was an avid sport fisherman and had his own boat.  Sadly we later found out that another family who left that same night was caught.

I grew up listening to the stories. I was in California at the lake in Franklin Canyon Park near Beverly Hills where Opie from The Andy Griffith Show threw the stone in the opening sequence, and I was listening to tapes of my father telling the old stories. I started writing down conversations that I imagined between my parents. But then I put it away for two years. Around October of 2009 I had a reading of the play for the first time. I said, “I wrote this thing and I’m looking for someone to shape it for me.” Theresa Gambacorta [actress, playwright, director] gives me her card and says, “I’ll do that.”

Who encouraged you to tell the story?

First of all I’m not a writer, this is the only thing I’ve ever written. I’m an actor. And this was just written through me.

It’s really a love story – love of country, of family – an American story. I didn’t set out to write a political piece of theatre. It’s a story about this particular family at this particular time in history. I think that’s why it is resonating with so many people. It’s not a commentary on Fidel or the United States.

Here in NY we have a reception after the show and I go out and meet the audience. Quite often people want to share their stories or their grandmother’s story. They really connect on a visceral level on what it’s like to be an American, no matter what their nationality.

I understand it will become a musical. Can you talk about that?

A full musical score is being written for the play by Paquito D’Rivera who is a legend – a jazz musician who has 13 Grammys, is a Kennedy Center honoree as a Living Jazz Legend, and was awarded the National Medal for the Arts.

How do you think that will change the impact of the story?

Part of the beauty of the show is its spareness. It’s really storytelling. But as a musical, in my gut, I think it’s going to be amazing. Cuba is going to be really hot, hot, hot with Antonio Banderas about to play Fidel Castro in a movie.

How do you feel about bringing the show here?

I’m so excited. I lived there for ten years when Dupont Circle was my old stomping ground  I got my acting legs in DC when I trained at the Studio Theatre and the Shakespeare Theatre’s Summer Workshop. Later I worked there and at Source and did Shear Madness at The Kennedy Center. I love Washington! 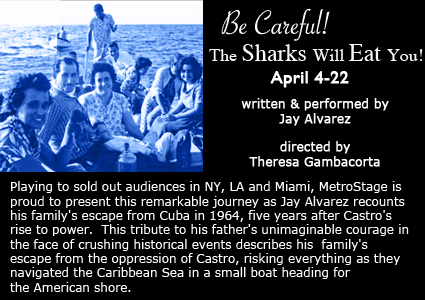 Be Careful! The Sharks Will Eat You! plays from April 4 to 22, 2012 at MetroStage – 1201 North Royal Street, in Alexandria, VA. Purchase your tickets online.