The opening performance of Tulipomania: The Musical, on Wednesday evening, May 30, 2012, was introduced with humor and winsomeness by Director and Producing Artistic Director Terrence Nolen, and Amy Murphy, Managing Director, who co-founded The Arden Theatre Company in 1988. The Arden has become a hotbed for new play development, and Tulipomania: The Musical, is its third Michael Ogborn premiere, following 2001′s Baby Case and 2003′s Cafe Puttanesca.

The time is both “now” and “1635″ for this new production of Tulipomania. The story begins, “Once upon a time there was a man who sacrificed all he possessed in the world – for a tulip”… Tulipomania is a story of a man that speculated in tulips in 1635 in Amsterdam.

Enter the Waiter (Billy Bustamante), who prances onto the stage in comic style and the quiet painter (Ben Dibble). Then, to get out of the rain, in burst two exuberant female customers, a young woman (Alex Keiper), and a woman co-worker (Joilet F. Harris), who are in Amsterdam for a “Human Resources” conference, complaining about the rain and that they will not be able to see the tulips before they leave the next day.

With the arrival of Adam Heller (Man), all six cast members are now onstage with six musicians performing on scaffolding above them. Heller, previously sitting quietly in a corner smoking, becomes engaged with the others and begins conveying a story of his own personal greed – that parallels with the story of the tulip speculator – so that there are two stories being acted and sung by this talented cast of six. And although I found both stories compelling, I found it all a little confusing at times.

Although there are many fine vocal performances, Heller’s rendition of ”In A Garden that We Two Will Grow” and Joilet F. Harris’ (Man’s Wife) heartrending and powerful  solo “Woman’s Song” -about the trials of being the “Man’s Wife” and loving enough to forgive – deservedly drew the  loudest rounds of applause and cheers. Coon’s beautiful voice also shines on “Tulipomania” and “What Have You Got to Lose?”

Every serious story needs some comic relief and here it’s in The Waiter and ‘Court Jester’ (Billy Bustamante), who both moves the story along and entertains us, showcasing not only his great voice but his agility as a dancer and a comedian. His rendition of “Walking in a Dream” is wonderful. Alex Keiper gives three flawless portrayals: the young conference attendee, Man’s daughter and the Painter’s lover. She is such a natural performer, that you forget quickly that she is actually acting.

Costume Designer Rosemarie E. McKelvey dresses the cast in casual clothing. Joilet enters wearing a colorful skarf that is used in multiple ways during the telling of the story. Only the Waiter is colorfully dressed in tights that shows off his body movements and sets him apart from the others.

Lighting Designer John Stephen Hoey creatively uses hanging lights covered with fabric to give the illusion of tulips. Music Director Dan Kazem, conducts five other musicians, who are staged on scaffolding above the cafe, while accompanying them on the piano. They are fine musicians!

Playwright Michael Ogborn, who wrote the book, music and lyrics explains in the production notes: “The score is contemporary in sound, structure and arrangement with harmonic underpinnings of 17th-century music and folk ballad forms, along with influences from Turkey and Afghanistan where the tulip was first discovered. This story gives me the opportunity to return to the themes I began exploring as a young composer: greed, forgiveness, redemption — and how one man’s actions profoundly affect those around him and history itself.” 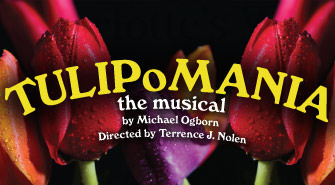 Running Time: 90 minutes, without an intermission. 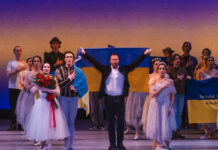 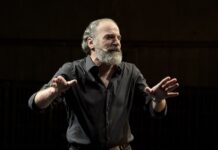