English-language opera, Greek tragedy, Mozart, tragedy, comic moments, and ballet: The In Series at the Atlas Performing Arts Center has it all in Charlotte Stoudt’s translation and adaptation of Idomeneo: King of Crete, originally an Italian opera by Wolfgang Amadeus Mozart with libretto by Giambattista Varesco. The In Series is an extension of the Concert Series, begun three decades ago at Mount Vernon College and driven to success in large part by Founder and Artistic Director Carla Hubner.

Director Tom Mallan’s production begins with silent reenactments of various events during the Trojan War told in elegant dances, including Agamemnon’s murder by his wife Clytemnestra and Idomeneo’s son Idamante rescuing his future love, Illia, at sea. The plot unfolds further when Idomeneo, King of Crete, played sincerely by Richard Tappen, returns from Troy after a ten-year stay at war.  En route across the sea, his ship encounters a violent storm, and, fearing for his already-injured men’s lives, he vows to the gods to sacrifice the first Cretan citizen he encounters on land. Unbeknownst to this – and unrecognizable ten years later as a man rather than a child- his son, Idamante, an earnest Peter Burroughs, is the first to encounter his father, the king, on Cretan soil.  Idomeneo struggles to avoid fulfilling his vow, even as his lands and people are ravaged by strong floods and as his son and Princess Illia, amazingly strong performer Randa Rouweyha, of Troy fall in love. Finally, Electra, an indomitable Jennifer Suess, pursued by the Furies and haunted by guilt after participating in the murder of her mother Clytemnestra with brother Orestes to revenge their father, takes her own life and absolves Idomeneo and Idamante of the required sacrifice.

In addition to the strengths championed by the leading cast, the remaining performers also share claims to this show’s strengths. Joseph Haughton, in his role as Arbace, advisor to the royal family, provides strong support – and humorous timing in several of his scenes with Tappen. The chorus, too numerous to name individually here, also provides a strong base for this opera. All of the actors take command of the stage with their strong vocal performances. Choreographers and dancers Heidi L. Kershaw and Alvaro Palau artfully illustrate several moments through powerful, graceful, – and at times – other worldly dance numbers throughout.

Many of the design elements aid in this production’s value. The scenic and lighting design by A.J. Guban is simple and stark, with the lighting perfectly reflecting the stone-like qualities of the set’s altars. Donna Breslin’s costumes add equally vivid notes to this opera. The different communities each bear their own color patterns: purple and gold for the Cretan royals; greens and blues for the non-royal community; oranges for the captured Trojans; and vibrant red for Electra, all of which grow muddied as the floods continue to ravage Crete.

Unfortunately, the props, by Natalia Barra and Matty Griffiths, appear crude and do not stand up to the set and costumes’ level of quality. One wonders why a simple, stage-worthy sword-of ancient Greek design or not-and stronger-looking shields were not utilized in an otherwise theatrically-sound production centered on one man’s vow of sacrifice, especially when that same man, King Idomeneo, cynically sings, “Our strength has always laid in our ability to slaughter.”

Overall, Idomeneo provides a nice homage to the larger-than-life Greek legends and stories while breathing enough life into the storyline to remind its audiences that wars, love, laughter, and community co-exist in the world today. 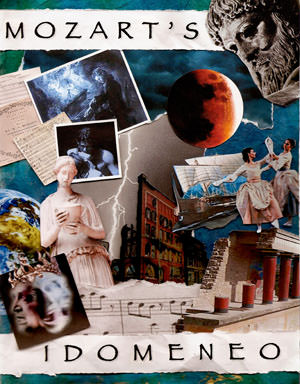 Idomeneo plays through June 17, 2012 at the Atlas Performing Arts Center –  1333 H Street NE, in Washington, DC. Purchase tickets here or by calling the box office at (202) 204-7763.  Directions and parking information can be found here.