When Reed Sandridge first started his ‘Year of Giving,’ no one could have predicted what would come of it. After losing his job, and beginning to fall into the depression that comes from unemployment, Reed decided that he needed to turn the tables. He decided to put into action a lesson his mother had taught him: When you need things the most, that’s when it’s time to give to others.

Reed decided to honor his mom by giving away $10 to a stranger each day for a year. He started giving on the anniversary of her death, and by the end, he had met 365 new friends, and shared their stories with countless others through yearofgiving.org. The web of lives that he touched with his $10 gifts is explored in this world premiere work, produced entirely by local DC-based artists.

Each character in A Year of Giving is based on someone who was touched by Reed’s gifts, either as a recipient, as someone who reached out to help those they read about on his blog, or those who were inspired to give in their own way after hearing about his story. Crafting this story involved combing through all 365 of Reed’s blog entries and choosing those stories that best highlighted the essence of his experience. Some were inspiring, some funny, some heartbreaking, and some even pissed a lot of people off.

I count myself very lucky to have met Reed during a Rockville Little Theatre production of The Laramie Project. Director Sasha Brått would lead “check-ins” at the start of each rehearsal, giving those of us in the cast the chance to share what was going on in our lives so we could better understand and support each other. It was at one of these check-ins that we became among the first to know that Reed had been laid off.

After an emotional and successful production, many of us in the cast kept in touch, and we were able to follow Reed’s progress throughout his ‘Year of Giving.’ We would check in periodically to see how his job search was going, and some of us were even able to be with him when he would give away his $10. I was incredible watching him start up a conversation with a total stranger and record their story. I know I could never have done what he was doing.

I was among the many people who found tremendous inspiration in Reed’s story, and over time we began talking about how to share his story in new ways. We threw out the idea of putting together a work of theater, and looked back on our experience in The Laramie Project for inspiration on how to incorporate a variety of voices into a work. After thinking more about what the end product would look like, we both agreed that it seemed like an ideal fit for the Capital Fringe Festival, since so many of these voices were rooted in DC.

Rockville Little Theatre, which produced that original production of Laramie signed on as a producer, and local writer Melanie Papasian got to work on an initial draft of the script. I was thrilled when Sasha Brått agreed to step in to direct. At the time of The Laramie Project we all knew he had tremendous talent, and he has since emerged as one of the most innovative, emotionally honest, and thoughtful directors in the DC area. The collaborative creation of this work has also involved local playwright, actor, and singer Steve Langley, as well as actress Devon Dupay.

A Year of Giving traces Reed’s journey, but the power of the work comes from the voices of those he touched, from notable locals such as Robert Egger from the DC Central Kitchen, to Knox, who could be the guy you see shining shoes outside your office every day, but never bothered to ask his name.

Everyone has a story to tell. Come hear theirs … you never know when you might find yourself on the receiving end of a $10 gift. 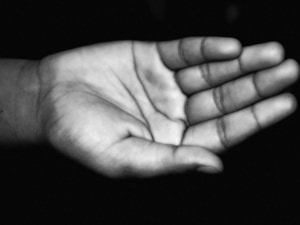 Performances are at the Goethe Institut – Gallery – 812 7th Street NW, one of the most comfortable and coolest venues in the Capital Fringe Festival.

Click on the following performance to purchase tickets, or purchase them online: