Pallas Theatre Collective returns to the Capital Fringe Festival to present a hilarious, family-friendly interpretation of Shakespeare’s The Comedy of Errors after their highly praised first season debut with The Many Women of Troy.

Pallas’s production of The Comedy of Mirrors by William Shakespeare features two actors doing double duty as two sets of twins, doubling and troubling the way we think about self and asking audiences to ponder how they see themselves and their society in the mirror! This exhilarating, quirky production, directed by Pallas Co-Artistic Director Tracey Elaine Chessum, features a top-notch cast of DC-based performers, and is guaranteed to tickle your funny bone. 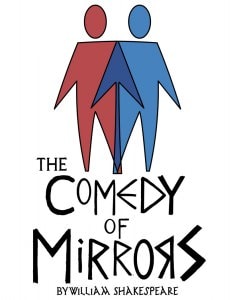 Why Shakespeare? Why The Comedy of Mirrors?

Pallas Theatre Collective’s primary focus is upon applied innovation, creating performances that are not only new, but also commercially viable for their intended audience.  It is with this in mind that co-Artistic Directors Tracey Elaine Chessum and Michael John Boynton, along with Executive Director Caroline Brent, decided to produce this new interpretation of this canonical work for the Fringe. The DC audience is one of the most educated in the country, and want to see theatre that not only entertains, but also challenges them. Pallas learned this last summer with the premiere of its highly praised debut of The Many Women of Troy, a postmodern musical adaptation of Euripides’ Greek tragedy. This young, innovative company saw what audiences and critics alike loved, and knew that this season they had to follow up with a piece even more dynamic. Pallas’s The Comedy of Mirrors embodies this notion of smart, innovative theatre and is ready to take the Fringe by storm later this month.

Click on the following performances to purchase tickets, or purchase them online.

Pallas’s production will also play the Warner Memorial Church in Kensington, MD July 26th through 28th at 8 pm. Additional information on this performance is available online.

About Pallas Theatre Collective:
Pallas Theatre Collective premiered the original musical The Many Women of Troy in the Hollywood Fringe Festival and Capital Fringe Festival in the summer of 2011, receiving stellar reviews from LA Weekly, Backstage West, and Two Hours Traffic. Since then, Pallas has embarked on its 2012 season with CrissCross Cabaret, a new kind of gender bending cabaret, and will continue after Comedy in August, with a reading of Trophies by Michael John Boynton as part of its annual reading series. Pallas Theatre Collective is a 501(c)3 nonprofit organization that exists to develop and workshop new, original plays and musicals; to offer new interpretations of canonical works; and to foster a creative environment for artists where new approaches and processes may be explored. For more information, visit us online.

Meet the cast of The Comedy of Mirrors.