The famed Italian novelist Italo Calvino during a 1968 visit to the US noted the following: Americans laugh at death. He had seen a comedy routine at a jazz club and wrote home about it,  somewhat astounded. Is everything fodder for jokes? But other than funerals, comedy is one of the few ways we can explore death communally. Like sex in the time of the Victorians, death is our cultural taboo. It proliferates on TV, in the realm of the fictional, but images of the coffins of our fallen soldiers were forbidden. Political reasons, granted, dominated that decision.  But the denial of death spreads its roots farther. Cemeteries are located far outside of city centers, where we scarcely see them. And our mental health establishment has recently set two weeks as the limit for normal grief. After that period, feelings of deep sadness and loss, sleeplessness, crying, loss of appetite, and tiredness can be diagnosed as depression and treated with drugs. In this atmosphere of cultural censorship, Mary Carpenter’s play, The New and Improved Stages of Grief, is necessary. 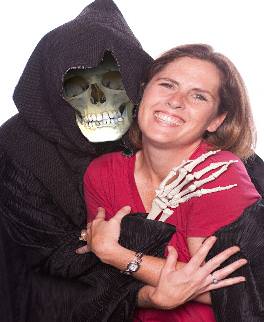 Carpenter in this one-woman show reinterprets Elisabeth Kubler-Ross’ stages of grief (denial, anger, bargaining, depression, and acceptance), adding other stages of her own (for example, Stage 1: WTF?  Stage 2: Casseroles). Behind the funny riffs on those stages is the story of her brother’s death and how she coped. What unfolds, believe it or not, is an enjoyable and somewhat poignant meditation on loss.

In the comfortable, intimate space of Caos on F, Carpenter establishes a good rapport with the audience, inviting participation at various points and engaging in some comic improv.  Long involved in the theater world as an actor, director, and writer, Carpenter handles difficult material she has carved out for herself successfully, for the most part. She plays two characters: she is herself, a woman who has lost two friends and a brother; and she is Dot, a TV personality with a thick Minnesota accent, star of the show “Death with Dot.” Dot hands out dos and don’ts for funeral attire and reception-line chatter, tips which are actually useful and which you won’t find elsewhere (no open-toed shoes at funerals, for example–who teaches us about these things?)

As Dot, Carpenter is convincing and hilarious. As herself, she tries hard to find a balance between comedy and poignancy, distance and self-revelation  Material that could be powerful is at times undercut by its comic packaging. But her inventive scene with God, who refuses to give her answers, is moving and strikes the perfect balance between humor, existential philosophy, and dead seriousness.

The ending could use some fine-tuning; the lights go too low and much emphasis is placed on a passage from a popular novel. More detail about the relevance of the passage to her life might have made for a more moving conclusion  But these quibbles are small. The subject matter is difficult and Carpenter has managed to get her hands around it in a way that is illuminating, entertaining, and meaningful.

The acting is good, the writing is solid, and the endeavor is brave and important.

To learn more information about the show and to purchase tickets, click here.