Fallen Angels, a trio of miniature operas composed, produced, and musically directed by Michael Oberhauser, shows much promise for future expansion. Under the direction of Nick Vargas, the cast of nine singers (three per opera) excels in presenting short stories of moral ambiguity that are set in the modern age but are adapted from historical texts, including the Bible and well-known poetry (Oberhauser and Shannon Berry also contribute original text to each of the three pieces). The individual stories, “Lilith,” “Temptation”, and “The Name on the Door,” are not inter-connected in terms of plot, but there is an overarching theme involving life choices and good and evil. Structurally, Oberhauser would be wise to ensure each opera has a plot with a beginning, middle, and end, but he is well on his way to creating a series of stories with modern relevance. Currently, Lilith is the most structurally sound and Temptation is in most need of refinement. 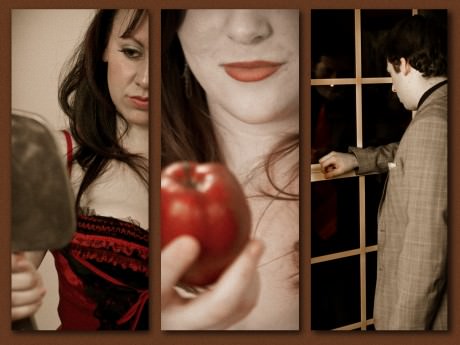 The strongest two elements of these 15-minute pieces, as currently presented, are the music and the cast tasked with presenting the music. Oberhauser has composed a series of songs, which move each piece’s plot forward yet are also musically interesting and, for the most part, diverse. With the help of a 6 piece orchestra comprised of exceedingly talented young musicians (William Yanesh- piano; Kimberly Eloshway- flute; Elena Forbes- clarinet; John Philligin- violin; and Henry Valoris- viola), his delightfully string-intensive music comes to life in a very professional way. Each of his cast members demonstrates astounding technical vocal ability and several are very compelling actors. Most successful in combining sound vocals with solid song interpretation, acting, and stage presence are Courtney Kalbacker (Lilith), Shelby Claire (Eve), and Annie Gill (Jezebel). The remaining cast members, Joseph Pleuss, Andrew Sauvageau, Benjamin Taylor, Francesca Aguado, Bennett Umhau, and Zoe Kanter, all have brilliant singing voices, but could use some work in emotionally connecting to the material. Francesca Aguado, however, deserves special mention for her rich and textured vocals.

Using minimal sets (no credit given) and lighting (Philip Jorgensen), the material is presented in a professional way that exceeds most music-heavy Fringe shows I’ve seen in recent years. Oberhauser is a composer from whom I hope to hear more of in the near future. The cast, likewise, has promising futures.

For more information on Fallen Angels and to purchase tickets, read our Fringe Preview.