The Baldacchino Gypsy Tent, with a loud crowd thronging in the bar next door, is the perfect setting. The crowd will likely be inside, too, standing against the edges of the tent, packed in for Nu Sass’ production of Tent of Dreams: An Occuplay, by Emily Crockett. 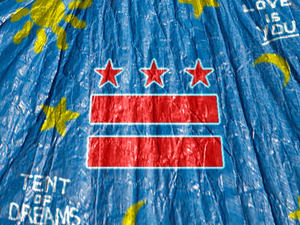 The fictional setting is McPherson Square. A young reporter, intent on livestreaming events at Occupy DC’s encampment, gets swept up in the Occupy movement, becoming a park denizen herself. The framework is a good one for the play, which explores Occupy DC’s motivations, modus operandi, and achievements.  Lydia, the reporter (played by Joanna Stevens) asks questions as an outsider and presses for clear responses, whether she is interviewing a park police officer or the most militant of the protesters.

Crockett, in fact, was a reporter – she covered the Occupy DC Movement for Campus Progress -and her play does a good job of faithfully representing the events, atmosphere and diversity in the movement. Abe, a homeless man, is fully drawn, beautifully played by Ed Klein. A police-averse anarchist, movingly played by Danielle Hutchinson, is given plenty of room to voice her more radical perspective, along with the events that gave rise to it.  A brainy, reasonable facilitator (Aubri O’Connor) is caught between respect for the ideals of the movement and the comforts of her nearby apartment and full-time job.  Jacob, an aspiring preacher (John Brougher) and Razz, a hippie (Kelly Keisling) are opposites in temperament but fully commit to the movement’s ideals.

And just what are those ideals? One of the valuable aspects of this play is that it spells them out, while at the same time delineating the struggles protesters had as they attempted to articulate them to a wider audience.  In one scene, a mainstream reporter asks what the movement is about.  “We’re against homelessness, corporate greed, environmental destruction,” comes the answer.  Reporter: “Can you be more specific?”

Tent of Dreams has informal, improvisational feel – a style that mirrors the Occupy Movement itself. And, as in the Occupy movement, decision-making on the play was collaborative. “We brought in a reporter and asked her to become a playwright,” director Emily Todd says in her program note. “We collected actors and asked them to hang out in a park, meet people, and then create a character based on those interactions. We spent weeks improvising before beginning to work with a script, which we edited together . . . .”

Because it faithfully renders the struggles, hopes, and accomplishments of Occupy DC and at the same time is watchable, funny, and even moving, Tent of Dreams is an important work, well worth every viewer’s time.

For more information and to purchase tickets, click here.