The Pallas Theatre Collective production of William Shakespeare’s The Comedy of Mirrors does exactly what a comedy is supposed to do, make you laugh. The laughs come often from the talented casts’ interpretation and delivery of Shakespeare’s scripts. The laughs sneak up to you as well in some of the costumes, such as a TSA costume and a Love Boat reference in a costume.

Michael Boyton brings most of the laughs playing both Antipholus of Syracuse and Antipholus of Ephesus. He plays one as a complete nerd, geek complete with thick glasses and pocket protectors. However, his acting sells it even more than the stereotypical costume items. Then he plays a more man’s man role where he is a complete opposite. 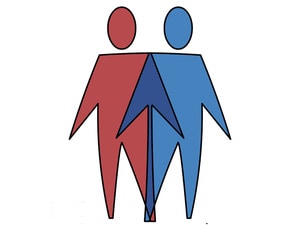 Pallas brings out a large cast for the Fringe Festival. Kelsey Painter plays Dromio of Syracuse and Ephesus. She is a delight to watch perform both roles as she plays them as a man. There are a lot of male roles played by woman.

Director Tracy Elaine Chessum has such a talented cast!  She does try to hide her cast members’ genders and just lets them play the characters.

Boyton and Painter are not the only actors who are doubled up. John Wahl does a stellar job portraying Aegeon and Dr. Pinch. I really enjoyed him as Dr. Pinch, a pastor, as Wahl portrays him a bit over the top – which is hilarious. Theresa Buelcher plays Nell – a cook, a merchant and a TSA agent. I smiled a bit as they brought in modern day agencies into the play. Rhea Smirlock portrays Emilia an Abbess and a barista. Natasha Joyce plays a merchant and a cruise director.

Laura Rocklyn (Andriana)) and Ty Hallmark (Luciana) made a delightful team as sisters. Kathleen Mason is splendid as Solinus. Cory Atwood is a hoot as a police officer. He has a  scene stealing moment  when he tries to re-handcuff Antipholus of Ephesus. John Horman (Angelo) adds much humor to the character of Antipholus of Esphesus. Chelsea Mayo ( A Courtesan) and Kristina Moyer (Messenger) round out the cast.

Brandon W. Vernon also wore a lot of hats being in charge of scenic design, the show’s artist and logo designer. The set was simple with a decorated doorway, and two side decorations. However, they did add a ship and used a projector on the sail, projected by Kristina Moyer.

The Comedy of Mirrors is 90 minutes of laughs, Shakespeare, and a talented cast. The audience loved it and I am sure you will as well!

For more information or to purchase tickets go to our Fringe Preview.