Planet Egg is one of the most ingenious shows at the Capital Fringe Festival. It is a puppet cinema performance, which means that the artists create a puppet show in front of a live camera while the audience watches the film on a projector screen.

When you walk into the theatre, there are two tables on either side of the stage toppled with clutter, mostly food and electronics. As the show starts, you realize that all of these things are props for the performance, such as water bottles used to make crinkling sounds and vegetable that turn out to be the main puppet characters onscreen. 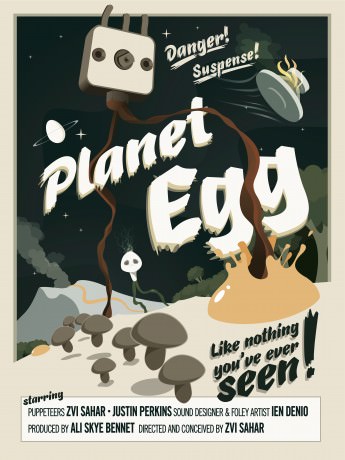 On one side of the stage he puppet masters, Zvi Sahar and Justin Perkins, manipulate inanimate objects right before the audience and make them come alive on the screen; it’s simply magical. On the other end of the stage is Ien Denio, the sound designer, who uses the most banal objects to create all the sound effects used in the film. All of this is incredible to watch.

The movie itself is very endearing; it is about an electronic device and a scallion that fall in love on this egg planet. There is more to the story than that but you must go watch it to get the full experience of this wonderful performance.

There were only about twenty people in the theatre on opening night, but Planet Egg received a standing ovation.

A ‘Must-See at the Capital Fringe, son’t miss this genius art form of puppet cinema. You will be absolutely delighted!

For more information and to purchase tickets, go to their Fringe Preview.