In the opening scene we meet Mr. Haley, a fired-up mortgage broker and Gordon’s boss, who is an uptight ass with some major personality issues. His idea of a good time is steam-rolling over his employees and approving loans that families can’t afford. When Gordon asks his boss for 30 days off to travel with his dying dad, you’re almost afraid boss man will yell, “NO!” But he doesn’t and the story goes on. 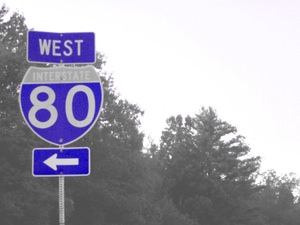 Next, in the hospital scene, Michael plays his dad – a quirky, lovable character it turns out- whom you’ll get to know even better through Gordon’s stories in later scenes. We’re in a mental hospital and we learn his dad is dying and can’t go on this trip with his son, so he wants Gordon to go alone and plant his little bonsai tree (pronounced boon-sai, with a long ‘o’) right next to his mother’s  grave in Prairie Creek Redwood Park, California. And Dad wants his son to do it by hitchhiking there. By the way, dad says when hitchhiking, you know you’re doing it right when you want to quit. Dad also hands sonny boy a sealed envelope containing a letter that he can’t read until he gets to California, a bag of ‘advice’ cookies, and of course his cherished boonsai tree.

As he sets out, we get to see the hitchhiker dance and man, it’s a beauty–better than Elaine’s awkward dancing in that old Seinfeld episode. Anyway, with his backpack filled with his dad’s letter, flask, bag of advice cookies, and water bottles, Gordon sets off to do what his dad asks of him.

As the lights go down and then come up, Gordon gets picked up by various drivers and during these interludes we learn more about Gordon and his life until he reaches his destination  – mother’s grave. Remember that letter in the sealed envelope? We get to hear what dad wrote to his much loved son, Gordon. I won’t spoil it though, you’ll have to go see the play and find out for yourself what dad wrote.

There’s so much good stuff you’ll hear during this play, like stories about his Dad and squirrels. You’ll also experience some brilliant acting along the way, for example, when Michael performs as the driver in Wyoming, a manic, recovered druggie who talks a-mile-a-minute non-stop during the entire drive to Utah. In fact, this is Michael’s first one-man show, and Capital Fringe debut, but you’d be surprised by this considering how well he performs and how well its delivered–the sound bites, lighting, and few props are more than enough to help your brain fill in the gaps.

Fringing is best done in a large group, so gather your besties and catch Michael Venske in Thumbs Up before he clears town and hitches back to Minnesota.

For more information on the show and to purchase tickets, click here.