Medieval Story Land (Written and Co-Produced by Scott Courlander) is this uproariously funny story of an innocent and naïve elf with a heart of gold named Todd (Forrest Rilling) who meets the mysterious Millennium Wizard (Michael Galizia). Todd learns from the wizard that it is his destiny to save Medieval Story Land from the Dark Black Darkness (**cue dramatic music: dun dun dun**) and is sent on an epic, magic-filled journey to King Richard City. 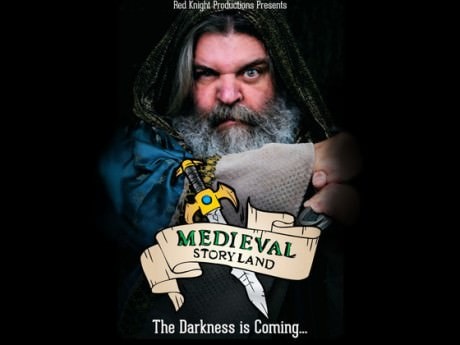 Not to be left out of this epic adventure is the gentle and beautiful maiden/love interest, Minda (Zitz). And what kind of epic quest would this be without a cast of evil villains? This role is filled by evil and scary Opaque Priest (Michael Cartwright, who also portrays King Richard).  Once Todd and his companions arrive at King Ricahrd’s castle, they are met with imposter Todd’s—The Green Todd (Marcus Clarke) and the Blue Knight Todd (Joseph Michael Jones) and several others—who challenge our hero to a jousting match. Can our hero defeat the imposters, prove that he is the One True Todd, save Medieval Story Land from the Dark Black Darkness (**cue dramatic music: dun dun dun**), and win the heart of his true love?

This show (directed by Guillaume Tourniaire and Co-Produced by Nick Hitchens) is definitely been my favorite of the six Fringe shows I have seen so far. The jokes are witty and delivered with amazing ease and perfect comedic timing. I was drawn into the story by the narrator – the beguiling Jester (Stephen Mead). The musical score (composed by Musical Director William Yanesh) and performed live by Yanesh and two other musicians during the show call to mind a land of dragons, monsters, knights and princesses.

I was trying to decide what the highlight of this show was and I couldn’t come up with just one thing. I don’t think I can choose between the amazingly talented, funny, and spot-on cast (who together play forty different human characters), or the comical and witty script, or the beautiful costumes (Costume Designer, Lois Dunlop), or the incredible ingenuity and creativity of using the cast as part of the scenery of trees and rocks, or the astounding, fast-paced, and intricately choreographed fight scenes (Choreographed by Casey Kaleba). Medieval Story Land will get my vote as Best Comedy for this year’s Fringe Audience Awards!

Medieval Story Land is a roaring good time, jam packed with monsters, magic, wizards, elves, trolls, knights, kings, and an epic quest filled with love, friendship, and some great swordplay! If you see nothing else for the rest of the Fringe Festival, make it a point to go see Medieval Story Land!

For more information on the show and to purchase tickets, see our Fringe Preview.