Veteran DC Artist B Stanley, Artistic Director of Theatre Du Jour, has this annoying habit of making me think every time I walk into his theatre. I prefer to live in a fluffy world of superheroes and rock stars. As it happens, both appear in Nightmerica, but now I might never be able to enjoy them again without suspicion that Uncle Same is programming my mind. 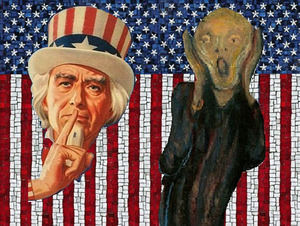 Nightmerica is an ensemble piece directed and conceived by Stanley that bombards the senses with images of “patriotic propaganda” through sophisticated multimedia presentation (by Mark Perkins, Nate Taylor and Rob Gould) and a number of sketches and monologues by actors David Berkenbilt, Jacqueline Erdman, Jerry Herbilla, Joseph Mills III, Rachel Reed, and Sydney Schwindt. The production registers aesthetically somewhere between a Michael Moore documentary and the episode of Sesame Street Joe McCarthy wouldn’t want you to see. Upon entering the theatre, patrons are scrutinized my TSA agents at the door – in the immediate wake of the Colorado Theater Massacre, you wonder if TDJ is satirizing homeland security, or merely anticipating the future?

Over the course of 60 minutes or so, the ensemble casts light on the many ways  Americans are brainwashed from pop culture to history class. The American citizenship test is presented as a Law and Order interrogation parody. Rachel Reed sings a burlesque style ditty about the founding fathers, her sexy curves distracting from the twisted history lyrics. In another powerful sketch, Herbilla tracks the progression of the American everyman through a childhood of baseball and Boy Scouts, to armed service, to homeless veteran status. Berkenbilt delivers a stirring poem about the American Dream from the perspective of an seasoned war vet.

What does it mean to be “un-American,” anyway? Am I more American than you? And what’s with all this “God Bless America” language – whose God are we talking about? Since when did Jesus appear in the Constitution? This might all sound like subversive-pinko-commie theatre, but there’s something stirringly patriotic in the air, perhaps summed up best in a photo hanging in the DCAC restroom: “The Right To Bear Art.”

Head on over to DC Arts Center and have your mind blown.

For more information and to purchase tickets click here.