Raising Cane, presented by Grain of Sand Theatre, was quite a pleasant surprise at the Capital Fringe. Set in a backwards incestuous cult in a location I can only presume is the South, the play resolves around the Queen (Sara Bickler) and the family that she overbearingly rules over. In this village, the Queen presides over a brutal brawl in which family members are regularly forced to fight against one another for the Queen’s amusement. When these matches turn deadly, society slowly begins to unravel as the family members begin to imagine new realities. 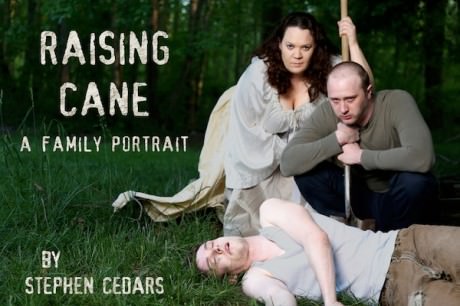 Artistic Director Christine Lange notes in the program, that this is a ‘dark, weird play.’ I couldn’t agree more. Featuring incest, violence, physical abuse, and excessive profanity, Raising Cane manages to bring the audience to an unfamiliar place, yet, by the final scene, makes an interesting case for why the society presented and our own society might not be so different after all.  Personally, it took me quite a while to get the message of the play; with almost 40 minutes of stage-fighting and the narrator beaten unconscious by a frying pan by the show’s end, the play is not as straightforward as the title would lead you to believe.

Even after the lights came on, audience members remained in their seats, not sure whether to remain or to leave. We were confused and wanted closure, but that’s the brilliant part of the show – – its up to you to connect the dots.

The strange accents, the incestuous culture, the utter disregard for personal hygiene, and the absurd amount of fighting alienate us from the world in which the actors live, yet simultaneously remind us about the absurdities of our own culture, and, like the characters in the show, how ifficult it is to separate what seems ‘natural'” from what is actually ‘cultural.’ It reminds us that, though we may feel that there is a ‘Queen’ governing how things ‘must be, things are never beyond repair and change.

It’s a dark, twisted story with a beautiful message about resistance, revolution, and courage… if you’re willing to look beyond the punches and blows.

For more information about the show and to purchase tickets, go to our Fringe Preview.