Welcome to the Farmhouse

Hello everyone, and welcome to the Farmhouse. My name is Stephen Gregory Smith, and I will be your tour guide through this isolated, remote house in rural Western Pennsylvania. Take my hand and hold tight, as we must move quickly. There isn’t much time left before sundown, and we have to prepare ourselves for the night. Though you and I may have never met before, as the seven strangers in this house had not, we will all be transported to this house soon enough. Till then, we only have to remember how we got here. What we were doing before we stumbled upon this place. How it all might have ended up elsewhere, as any one person’s day might, if we would have only done one thing differently. But we didn’t. So here we are. Pull up a chair and I will tell you how I got here myself.

I grew up in Western Pennsylvania, in a beautiful neighborhood full of rolling hills and rambling woods. There are no streetlights on our road, so when it gets dark at night, there is only the light of the moon. The perfect environment for one’s imagination to run wild. And one fateful night in the late 1980s, I saw in the weekly TV Guide that a black and white movie called Night of the Living Dead, filmed in 1968 not far from where we lived, was about to air on A&E. And my plan was set in motion. I already had a secret ritual: When the Sunday paper came, I would scan it for all the horror movies that would be coming on, make note of their times and channels, and then set the VCR to record them – all without the knowledge of my mother. There were some that I knew that I could watch and my Mom wouldn’t care, and then there were those that I knew for a fact would not be allowed. I tried to use the film’s local relevance as a point of interest to convince my mother to let me watch it, but that turned out to be a bust. As soon as I mentioned the title of the film, she informed me that she would not have me watching it, as it would give me nightmares for a week.

Normally, this would have made me give up all together, but this time, it only made my curiosity grow more rabid. The title alone sent shivers up my spine. I had heard one of the older kids on my bus, in an older, wiser, and almost whispered tone, tell another kid that he had actually heard that it was based on a true story that had happened right around here. My mind reeled at the thought of this, and to actually see the film became a life goal at the age of 8. The day that I turned the page of the TV Guide and saw that my opportunity had arrived, I felt a tingling in my back. The same tingling that Vincent Price warned was the telltale sign that I had caught The Tingler in the movie that I videotaped the week before. I knew Mom was going to be visiting with our neighbor that night, so I made my plan.

As I watched my mother through the bedroom window, walking across our yard to visit the neighbors, I hurriedly unwrapped the cellophane on my brand new three-pack of Memorex VHS tapes, and slid one into the VCR. I programmed the machine, and as the flip-number alarm clock on my mother’s nightstand turned to 8:00 PM, the red ‘Record’ light switched on, and the VCR began its work. Clunky, strange music began to play as the screen went black, and then lit up in a grainy monochrome picture revealing a rural Western Pennsylvania countryside, and a solitary car descending a hill. This looked like any road that led to my house, and as the eerie music developed, I watched in anticipatory horror as this car drove to its clearly doomed final destination.

A love affair was born in this moment. As I watched in terror, Barbara ran from an unknown attacker through the woods, spotting a lonely farmhouse. I kept checking the window, watching to see if Mom was walking back. Barbara entered the farmhouse and looked out the windows, searching for her assailant. I ran to the window and saw my mother walking back from next door, and the sight of her silhouette across the yard gave me the jump of my life. I turned the TV off as the VCR continued to record the horror that would unfold, as the unlucky seven endured the last night of their lives. It would not be until the next day that I would find out what the fates of those strangers entailed. And the results were beyond my wildest imaginings. More on that later.

Fast forward to now. Here we are in 2012. The Mayan “end of the world.” (However hyped and exaggerated that turned out to be). Zombies are everywhere! They are on a prime time cable series, they are in the cinema, and we see news reports of zombie-like attacks due to a new synthetic drug. There are breaking news alerts emailed to us. We have color-coded terror warnings. Not too long ago, we were advised to put plastic sheeting and duct tape around our windows to protect ourselves from an invisible death that might at any moment slip into our homes. 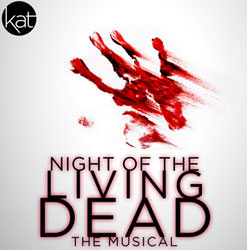 And here we are, auditioning for NightoftheLivingDead the musical at Kensington Arts Theatre.

Tonight was our first open call audition for our show, and while I was thrilled with the talent that showed up tonight, I am looking forward to even more surprises at our next auditions on Wednesday night. These seven people who find themselves trapped in the farmhouse are seven completely different individuals who find themselves thrown together in the worst of possible scenarios. It will take all types to make this show the brilliant cross-section of America I know it can be. For more information, please visit KAT’s homepage.