Welcome back to the Farmhouse. If you listen close, you will hear the pitter patter of little feet running and skipping around. All at once you see her…a small child with no malice in her heart. She skips and twirls through the house, until she sees herself in the mirror…then she changes her games. She changes in that moment, and realizes that her role in the evening’s events is different than what she first expected. She carries her worn teddy bear to the cellar and awaits the rest of the evening’s events, all the while knowing the future much more than the other 6 strangers trapped within our Farmhouse.

Her name is Karen.

She is the ticking time bomb in the basement, and no one else knows that. At least not yet…they will know it in time.

While putting this show together over the course of the last ten years, Karen was never a character in the show. She was to be the invisible child, as influenced by The Women of Brewster Place at Arena Stage. We saw how this didn’t work so well in New York, and one evening over barbecue in my back yard, we had a summit about Karen, between my Co-Director, Jenna Ballard, my Scenic and Lighting Designer, Kevin Boyce, and composer, Matt Conner. After discussing why we shouldn’t see her for an hour, Jenna brought up the fact of what if we did see her…the discusssion quickly hightened, and as if from no where, Karen was made real. So what if she is there, we reasoned? Does it aid us in any way? Or is she now a “zombie”, something that we didn’t want to see in the house. Through careful consideration, she is now there, and both life and death. And creating the scenes to her design, as if this were a giant doll house, and she is arranging the barbie dolls.

She is, after all, the only one in the house who is closest to death from the first moment of the show. It is only fitting that she leads them all to where she is. So finding this little girl would be a challenge. Then in walked Maya.

Maya has the biggest eyes that I have ever seen. She looks like a fairground cupie doll. The expressivness in those eyes seems way beyond her years. I saw that from her first audition for the show. And now I am so happy to see her at rehearsal. She has an adult’s handle on the show, and she is the perfect girl for our show. Why did we never have a little girl till now? I am stubborn.

In putting this show together with my brilliant husband-to be, it was very clear that we wanted NO ZOMBIES in our show…having her there would be a zombie in the basement. After the NYC production, it was clear to me that there were issues with having an unseen and imaginary Karen. My brilliant Co-Director, Jenna Ballard and I had it out one night in my back yard, and eventually came to the agreement that having her there would be a good thing. Now I cannot envision this show without her. We have made her such a part of the show that the show doesn’t happen without the little girl turning the wheels.

So thanks to Jenna Ballard and Matt Conner we will have the first real live Karen in our show. And the edition to the show is immense.

So here she is, the 7th cast member, Maya Gensler. 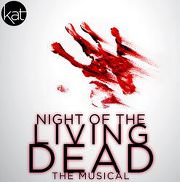 All photos by Stephen Gregory Smith.