The sexy young cast reviving Rent at Silhouette Stages in Columbia is better than a can of Red Bull at delivering a jumpin’ jolt of energy. Here’s a weekend show guaranteed to crank you up and get you set for nosediving into Monday’s challenges.

Working in partnership with Howard Community College, this small community theater in the sleepy village of Wilde Lake has gained a tried-and-true treasure in director Susan G. Kramer. Kramer is a veteran leading light of The Arts Collective@ HCC. Here she seizes on Jonathan Larson’s 1996 take on Puccini’s La Boheme for a non-stop exercise in musical stream-of-consciousness, probing the hazy line between subculture and community in a group of East Village bohemians with a self-destructive allegiance to “anything taboo.”

Randy Dunkle is a particularly strong fit as Jewish intellectual Mark Cohen, a would-be filmmaker who has been obsessively documenting his tenement existence ever since his girlfriend ran out on him for a lesbian lover.

Caelyn Sommerville plays the seductive exotic dancer Mimi to the hilt. She finds in Mark’s shy roommate Roger (appealing Jason Phillips) a sympatico lover with a similar tragic past and the mutual medical threat of HIV/AIDS. At one point, Kramer has Summerville do a sort of pole-dance using the entire audience as her pole  in the extraordinary “Out Tonight” solo.

Malcolm Lewis makes for a dynamic and intriguing Angel Schunard, an outgoing transsexual with a positive prescription for all the negative and confining definitions that society imposes.

Making perhaps the most indelible local stage debut of all, though, is Jamar Brown, whose larger-than-life voice and presence rivets our attention on the character of Tom Collins, the African-American  teacher who left gainful employment at MIT to pursue “La Vie Boheme” as a full-time homosexual. On the night I attended, Brown socked all his big vocal moments in the spotlight out of the county.

Nina Kaufman as Maureen, the bisexual muse of every jilted lovers’ lament, “The Tango Maureen,” is another powerhouse on stage. Her piece of performance art involving cows and the moon and a lot of other nonsense worked about as well in this production as I’ve ever seen it work, and that is all due to Kaufman’s unbridled commitment to the material

Providing firm character support for all these flamboyant figures  are Zaria Stott as Maureen’s establishment lover, Joanne, and John Gurtshaw as Benjamin Coffin, the — believe it or not — sympathetic slumlord.

The very active ensemble players are so strong and well placed by Kramer, and help provide the focus for a lot of movement — a testiment indeed to Kramer’s sure hand.

For a show openly hostile to religious sentiment, Rent has more than a tinge of gospel feel to its songs. The Silhouette cast is among the best I’ve heard at bringing that gospel subtext front and center. That is partly due to the strong African-American make-up of the cast, but credit must also go to Stacey Antoine’s skillful musical direction.

Leading a live, five-piece pit orchestra from an upstage hideaway, Antoine coaxes almost perfect harmonic cohesion from the evening’s big centerpiece numbers like “Seasons of Love” and “Will I?”

Ryan Michael Haase’s vivid set design is erected with scaffolding and wire gridwork that suggests both the flux of a squatter’s tenement and the Manhattan skyline beyond.

Running Time: Two and a half hours plus a 15-minute intermission. 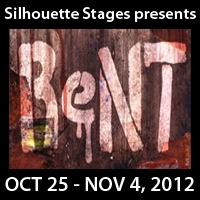