Glengarry Glen Ross at American University’s Katzen Arts Center was a wild ride.  First off, special consent was given by David Mamet for a bold twist – seven women play the men’s roles. With direction by Javier Rivera, let me say, they’re confident and they’re professional. The whole experience knocked my socks off.

Upon entering the intimate black-box theatre, I’m intrigued by the setup. Audience members can sit on all three sides of the carefully crafted stage area. The first scene, set in a Chinese restaurant, is manifested by two tables with four chairs at each (clever, so that the actors can move around, as lengthy scenes and monologues ensue), covered by red table cloths and potted bamboo. Set Designer Jen Rankin and Assistant Set Designer Leah Gussoff provide a red backdrop made of four wooden panels with gold trim and characters in the middle. 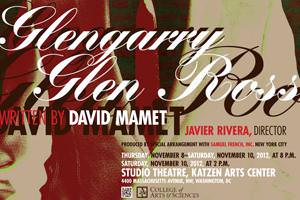 Blackout. The sound of men’s voices plays through the speakers – men cracking crude yet sadly common jokes about women. The waitress (Chelsea Thaler, who also skillfully plays Baylen later on, engaged in the action and in the moment) enters with poise, carrying plates of food. The businesswomen enter in men’s suits with their hair tightly tucked back, and tie their neckties in front of us, getting ready for work. Costume Designer Jane Dempsey made a smart choice dressing them in  men’s suits, as these actors are tough, focused, and embody masculine postures at times, no doubt intentional.

Alex Marvi ‘s sound design and Chakauna Cleveland’s lighting design work together to enhance the mood and setting during the action and provoke thought when changing scenes. During intermission, the set is transformed from a Chinese restaurant to a disheveled corporate office, with the four wooden panels now a chalkboard and office furniture overturned, papers strewn about. Bright lighting illuminates the room like fluorescent light. Tribal music plays in between scenes in this act, foreshadowing. Effects in red light are used, which I interpreted at one point to be when “stuff hits the fan” – to put it politely. Being a Mamet play, the language and references in this dark comedy are in your face, and I personally loved seeing women throwing curse words around like sailors.

In the world of real estate these characters live in, it’s every man for himself. Time is money. Sound familiar? I’m immediately drawn in from Scene 1, when Madeline Steiner (Shelly Levene) sits in the restaurant with Linda Bard (John Williamson), making an argument for her life at the agency. Her intensity, passion, and clearly developed character with strong background connections come out consistently throughout the entire play. Bard is calm and calculating as Williamson, realistic and no‑nonsense. It creates great conflict.

In the next scene, the impressively fast-talking, witty Bianca Lipford (Dave Moss) lays it all out for Alison Donelly’s character George Aaronow, who is quite agreeable until an outlandish request is made. Even then, she’s put together. One of my favorite scenes of Aaronow is later in the play when she shows several different dynamics of frustration, worry, anger…. no more will be said now, so that I don’t spoil it.

Erika Grob (Richard Roma) offers theories, questions and answers when addressing Ramya Anbalagan (James Lingk), which got me thinking about human nature and the state of things. Grob’s strong stage presence and persuasiveness offer great contrast to Anbalagan’s carefully crafted tense, nervousness. There is a tremendous amount of text in this play, and all the actors move through it fluidly and with perfect pace, as if it’s really their everyday life. There were several times I felt I was eavesdropping on private conversations. All of the actors have highly developed characters and clearly worked diligently, and now they get to have fun.

Glengarry Glen Ross is a daring piece of political, social, and economic commentary that’ll spin your wheels. Go see it. But get there early because it’s a small theatre, it’s really popular, and it was sold out well before curtain. 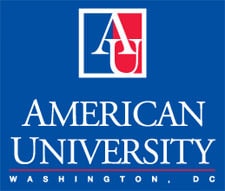 Glengarry Glen Ross plays through Saturday November 10, 2012 at American University’s Studio Theatre in the Katzen Arts Center – 4400 Massachusetts Avenue NW Washington, DC. Tickets can be purchased at the box office or by  calling the box office one hour before the performances at (202) 885-3634. Online purchasing has ended.