The audience entered Strathmore on November 8, 2012, for Linda Eder’s concert Songbirds with high expectations — expectations which were more than amply fulfilled by the delightful concert.

Eder explained that often she is asked to choose a “theme” for her concerts, though normally she just sings what she wants. Yet the theme for tonight was the classic standards by classic singers, including Etta James’ “At Last,” and Patsy Cline’s “Crazy.” However, true to her word, she also sang pretty much what she wanted: country (including “Waiting for the Fall,” which Eder composed herself), pop (including Adele’s “Someone Like You,” and “Rolling in the Deep”), and Broadway (including a lovely arrangement of “On the Street Where You Live” from  My Fair Lady). Eder’s voice is equally suited to the various different genres, and her enchanting voice, along with her laid-back, fun attitude, really made for an eclectic, entertaining evening.

Eder was in fine form, her voice strong and full, and clear as a bell. She began the concert with “I Will Wait for You” (from The Umbrellas of Cherbourg) and continued through a run of songs about the weather: “Blue Skies,” “Stormy Weather,” and “Summer Knows”. From there, Eder’s eclectic song choice really shown through, with songs including “Everything I Do (I Do It For You),” “Falling Slowly” (from the movie Once), Jekyll and Hyde’s “Someone Like Me”, “Charade,” and “Son of a Preacher Man.”

Eder was relaxed and comfortable, joking with the audience and playing with the band – during the last few notes of “On the Street Where You Live”, Eder and her guitarist dueled over whether Eder could hold the note longer than the guitarist could improvise. It was very enjoyable – both for them and for the audience.

Eder’s backup musicians really added to the concert: Jerry Marotta on drums, Peter Calo on guitar, David Finck on bass, and Billy Stein as music director and pianist. They provided backup vocals on various songs (including a lovely duet between Peter Calo and Eder on “Falling Slowly”), and generally added to the merry atmosphere. For example, Jerry Marotta had a drum solo during “Walkin’ After Midnight” which included not only drums, but Marotta drumming on drum stands, music stands, even the bass player’s head. It was hilarious and very entertaining.

The evening also included very touching moments: Eder shared how her town lost two young boys to Hurricane Sandy, and then dedicated the touching song “More Than Heaven” to all the victims of Hurricane Sandy. Her encore of “I’m Always Chasing Rainbows/Over the Rainbow” was sweet and sincere, and a perfect note on which to end this wonderful concert.

Linda Eder is always a lovely performer, and tonight was no different. With a crystal clear voice, songs that appeal to everyone, and an engaging attitude, Eder made sure everyone left with a smile on their face. 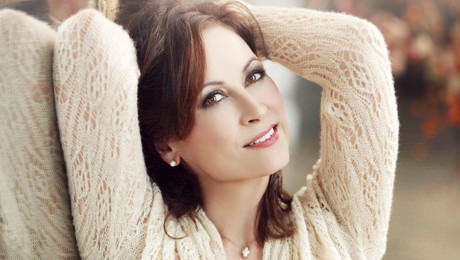 Songbirds with Linda Eder played its only performance on Thursday, November 8, 2012 at The Music Center at Strathmore – 5301 Tuckerman Lane, in North Bethesda, MD. To view their upcoming events, check out their calendar.