Life is a banquet and most poor suckers are starving to death so live, Live, LIVE! The philosophy practiced proud and true by the bold and talented cast of Mame at Spotlighters Theatre this holiday season, ensuring that you get your fill of wondrous music, seasonal entertainment, and an all-round good feeling. The theatre’s intimate house provides the perfect atmosphere for the audience to feel as if they’re personally invited into one of Mame Dennis’ wild and zany cocktail parties; being brought that much closer to the life of the party with every seat a perfect view of all the crazy encounters in the daring life she leads. This great holiday classic is one to treasure with the family, so bring the kids along for a sensational seasonal musical.

Set Designer Alan Zemla works to transform that cozy stage into a swinging happening hot spot, more astutely No. 3 Beekman Place, home sweet home to eccentric millionaire Mame Dennis. In doing so he still leaves plenty of room to unobtrusively house the musicians so that the audience can enjoy the resplendent sounds of live music. Zemla creates seamless scene changes with great detailed decorations by using double sided pictures and portraits and having these changes cleverly concealed during the chaos of dance routines and street scenes. The transition that goes the smoothest and is the most amazing is when they go from inside the apartment to the busy bustling streets of New York City, and it happens right before your eyes with simple flips of hanging art becoming street signs while the ensemble sing and dance around.

Costume Designer Laura Nicholson outdoes herself with Mame and Veera, the two most elegantly decorated women in the show. While Mame’s outfits tend to lean toward the more classically lavish side, Veera’s are outright gaudy and garish, a perfect fit for the larger than life stage actress’s character. Nicholson decks Veera out in enough glitter and glitz to outdress the Christmas tree in Rockefeller Center and she’s adorned with enough trinkets to repurchase the island of Manhattan. But the dress of all dresses is reserved for the title character in act II. Mame is fitted into a debutante’s dream dress, a cream chiffon and lace tangle of layers and brightness that cascade down her figure making her stand out like a snowman on a beach.

The most important factor in a musical is of course the music, none of which would have been possible without the incredible talents of Musical Director Michael Tan. Working with the cast to achieve the perfect level of bubbling holiday spirit from Jerry Herman’s upbeat score, Tan also provides live keyboard orchestrations during the performance. His musical prowess is second to none and his vast knowledge of how to evoke emotion into song is well reflected with this cast’s performances.

With a large ensemble you would expect many of the voices to blend into the depths of harmonies and melodies, but one voice in particular was able to shine above and be heard in every single group song. Vince Vuono (doubling up as both Ralph Divine in act I and Uncle Jeff in act II) has the voice of true Christmas spirit. A powerful sound, even when singing harmonies, surges up from the ensemble, being belted with the passions of joy and elation from deep within him. Vuono is easily picked out in any ensemble number and often carries the songs to new emotional heights with his expressive voice.

Plucking out an off-color character in a house of nuts is easier than you think with Agnes Gooch (Allie Dreskin). Playing the whiny obnoxious none-too-sure of herself nanny turned housemaid, Dreskin falls into her own with boisterously shrieked peals of laughter that could easily equate her with a deranged hyena. Her voice is quite lyrical, as proven early in the show during “St. Bridget.” But when she breaks out the belt for “Gooch’s Song” Dreskin manages to maintain the musical integrity of the number while still adhering to the insufferable mousy little character she’s created.

With the voice of a Christmas Angel, Austin Brannan takes to the stage as young Patrick, the suddenly orphaned boy who finds himself in the care of his idiosyncratic aunt. With the sweet angelic sounds of youth pouring from his voice, Brannan never misses a beat and has flawless chemistry with Mame. Singing lovely duets with his aunt, like “It’s Today” and “My Best Girl,” this precocious little darling easily melts his way into your heart while having a superior command over his singing voice at just eleven years of age. Matching his skill and mannerisms to make the transition from little boy to all grown-up that much easier is James Ruth as Older Patrick. Ruth assimilates his pitch and gestures to match his younger self with a perfection that convinces the audience that time really has passed and that he really has grown-up into a fine young man.

Saving the best for last, the title character, Mame Dennis (Michele Guyton) is a crowd pleasing, heart winning, doll of a catch with an extremely talented set of pipes and a warm soul that invites everyone into her world. Her sweet charming flirtations with southern Beauregard (Greg Guyton) are simply delightful. When Greg Guyton takes to leading the song all about the woman he’s fallen in love with, his voice shines and radiates as brightly as her smile does in this number. Michele Guyton is blazing with passion and a strong sense of adventure, especially in “Open A New Window,” and she really welcomes in the holiday spirit, her voice ringing like the bells of Christmas morning during “We Need A Little Christmas.” Riding the wave of emotions like a pro surfer, Guyton offers the audience sorrow and nostalgia, joy and jubilation, and a plethora of other appropriate feelings for this festive season; a shining star that anyone would be proud to have atop their tree.

So do yourself a favor and open a new window, it will most certainly lead you out to the path of discovery and adventure, especially if you follow it to Spotlighters Theatre this holiday season.

Running Time: Two hours and 20 minute with one intermission. 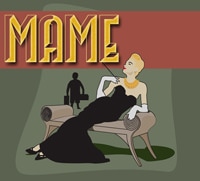 ‘Heroes of the Fourth Turning’ at Studio shocks the system