Faction of Fools Theatre Company combines Charles Dickens and Commedia Dell’Arte this Christmas for an inspired production of A Commedia Christmas Carol. The larger than life fable with its comi-tragic story and over-the-top ghosts is the perfect story for a group of ancient clowns with their masks and stylized body comedy.

Faction of Fools is dedicated to celebrating and promoting this Italian renaissance theatrical style that is characterized by masks, physical comedy, improvisation, and archetypal characters. Conveniently, one main archetype is the greedy old man, which works perfectly with Dickens’ morality fable of Scrooge and his hatred of Christmas and love of money.

The scripts sticks surprisingly close to the novel for most of it, quoting the formal English at length, but company Artistic Director Matthew R. Wilson adapted the script (as well as directed) and managed to interject a number of modern references that had the audience hooting. He brought in movies like Jerry McGuire and When Harry Met Sally and our current economic crisis. After all, the tale of the miserly rich and the suffering poor is more relevant now than ever. Wilson is fond of simple puns and wordplay as well.

As director, Wilson had his work cut out for him, because as much as he enjoyed the language, a lot of the action happened without a word. The first scene in Scrooge’s office was a good example as characters came in and out asking for money and wishing him a Merry Christmas as Scrooge (Paul Reisman) and Bob Cratchit (Joel David Santner) tried to work. Each character ran circles around them and Cratchit froze every time the door opened and was repeatedly and hilariously knocked off his feet by each visitor. Each scene is carefully laid out for maximum laughs and maximum effect. The final disturbing moments with the Ghost of Christmas Yet to Come had the windows of the set turned into video screens and the future played out in images of the masked characters on the screens.

The set by Ethan Sinnott is a masterpiece. Eight exits and four balconies and a staircase provide more than enough nooks and crannies for every complicated action and the stacked doors, windows, and chimneys perfectly convey the chaos of rapidly expanding and industrializing Victorian England. The actors seem to have great fun running all over and through every door and window during the play.

Every actor is steeply immersed in commedia and every moment they are onstage they are playing and dancing with each other. Each one must act with their whole bodies as traditional Italian masks cover half of their faces and in some cases their entire heads. Paul Reisman (Scrooge) anchors the piece with a delightful performance. Scrooge is the perfect character to make into a clown, miserly and awful and hilarious by turn. Joel David Santner (Bob Cratchit, The Ghost of Christmas Past) is a standout and a master of body comedy. Julie Garner (Mrs. Cratchit, Clara, Belle) sometimes must change character onstage and the transformation is impressive. Toby Mulford (Jacob Marley, Ghosts of Christmas Present and Yet to Come, Mr. Fezziwig) is great, particularly as Marley. The scene has the most complicated wordplay of the script and he and Reisman have great timing. Michael Sprouse (Tiny Tim) is a senior at Gallaudet University (Gallaudet University’s Theatre Arts program is a supporting partner) and signs Tiny Tim’s iconic word. The sweet moment of Tiny Tim’s “God Bless Us Everyone” is very powerful in BSL (British Sign Language).

Denise Umland designed costumes from the period and the wool coats and plaid pants look great with the set and the seasonal nature of the play. Scrooge’s red long johns and long red cap were an excellent choice. With the paranormal characters, she branched out to huge capes of black and made a candle of the Ghost of Christmas Past’s head. The main parts of the piece, however, are the masks by Tara Cariaso and Aaron Elson. Made with thick wax and long, beaked noses and fluffy beards, they look amazing. Several characters have entire, huge heads that are beautifully crafted. The crowning glory is the Ghost of Christmas Present with a crown of berries and grass and who knows what else that extended a couple feet above the actor.

Thomas Sowers did a great job on sound design, which was an unusually important part of the play since there were extended sequences of action and comedy where no one spoke and he managed to conjure London at Christmas with all the bustle and craziness, not to mention carrying most of the eerie otherworldly mood of the ghost’s visits. In that, he was assisted by Lightning Designer Andrew Griffin whose mood lighting, especially during the surreal visit of the Ghost of Christmas Yet to Come was very effective.

Faction of Fools created something pretty special with this production – a traditional take on this Christmas classic, preserving the spirit of Christmas and the spirit of the play that keeps it in production year after year – yet one that is unlike any other production out there, alternatively moving and hilarious. 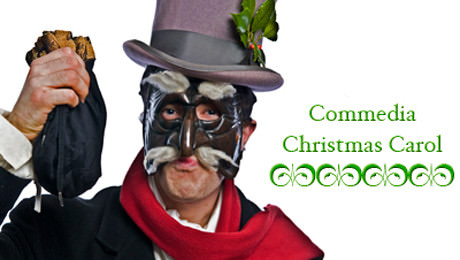