The Pirate Laureate of Port Town is a mouthful…like most good things! Movie popcorn, a drink at 5:00 Friday, and air after being submerged under water for a particularly unpleasant amount of time. But, all good things become bad in excess (especially movie popcorn). 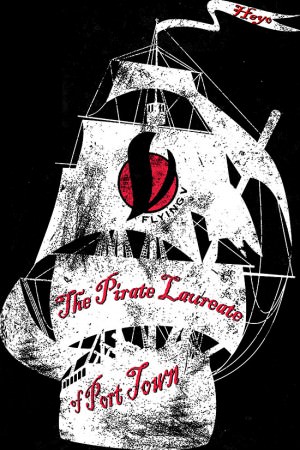 I’ve been intensely working on The Pirate Laureate of Port Town almost non-stop for over a year, though started it about five years ago. It’s had countless rewrites, and handful of workshops, three readings, and even one production in Los Angeles. And I gotta tell ya, it’s still good.

Of course, though, I’m biased. I mean, I wrote it. As one of my close friends said, it’s my “brain baby.” Yeah, I guess it is. But my brain was totally impregnated by so much more than my own thoughts and doodles. I have X-Men comic books and Jules Verne books to thank. And the Monkey Island series of point-and-click video games. Relationships failed by distance, and even my parents’ divorce.

Okay, yes, this can be said about most creators, that they draw from their experiences. But throughout the process of this piratical production with Flying V, the cast and crew (so really the crew and THE CREW) unburied so much of my reality. A reality that I had no idea was woven within the fabric of my script. And maybe never was. It’s really a true testament to the artistic geniuses bringing The Pirate Laureate of Port Town to life.

But though it’s a “pirate play”- I feel like a lot of people say that with their eyes rolled–it’s super atypical. In the world of this play, piracy is conducted through poetry, instead of violence. So, the Pirate Laureate is the most important member of any peerless pirate crew. Though it has its fair share of swordplay, it’s met with just as much – no, more–wordplay, as well. Words that are more powerful than a fired cannon: rhymes that sting like a cutlass against your cheek, metaphors that hit the soul like a bullet in the chest. (Did I mention this play is REALLY well-written?)

But above all of the words and weapons, I like to think The Pirate Laureate of Port Town has heart. The pirates of the feared Chartreuse are a genuine family. I’m not sure how often pirate crews are thought of as families. They are usually categorized as village-pillaging, gold-seeking bands of marauders and thieves.The bombastic Archibald Grayscale is not just the Captain of the ship, but the paternal role-model as well.

There’s obviously a lot to grab onto. I think Flying V and the team behind The Pirate Laureate of Port Town have grabbed on and haven’t let go as soon as this journey on the theatrical high seas began.

As the playwright, this means everything to me. So despite having been living with this play through three leases, two presidents (well, to be fair, the same president twice), and one really bad haircut, it still is so good. It makes me feel SO good. It hasn’t gone rotten with excess, and I don’t look at it in disgust (you know who you are, screenplay I wrote in high school). The Pirate Laureate is a mouthful alright, and I still love the way it tastes…I really need some better analogies.

The Pirate Laureate of Port Town plays TONIGHT February 1, 2013 through February 17, 2013 at Flying V at The Writer’s Center – 4508 Walsh Street, in Bethesda, MD. For tickets, purchase them online.