The Clarice Smith Performing Arts Center is known for its quality performances, and the audience is always more than appreciative. But the February 15, 2013 concert, An Evening with Branford Marsalis, had a level of energy and excitement not often seen at the Center.

Introduced by Susie Farr, the quartet sauntered onstage as if they were showing up to an informal jam session—a fun, relaxed tone that continued throughout the evening, and allowed the audience to relax and truly get excited about the music. They were constantly laughing, talking, even exchanging inside jokes while playing and between pieces (Branford Marsalis clued the audience in to one of the jokes: the audience was to google “the Lick”—an overdone musical phrase that the quartet only uses in an attempt to make each other laugh, or groan). In response, the audience was extraordinarily energetic—responding to the music with cheers and hoots, and even interacting with the musicians. At one point, Marsalis was talking about how, as a young man, he learned how important it was to learn the old jazz masters—“the old men”, and proceeded to play an arrangement of the Gershwin’s “Our Love Is Here to Stay.” The audience clearly was a fan of the standard (and the “old men”), as they wildly applauded, but one man, encouraged by Marsalis’s warmth and informality, yelled “Old Men rock!” Marsalis, in the midst of a solo, responded, “Yes they do!” Such engaging showmanship, in conjunction with fantastic music, made for a truly enjoyable evening.

With Joey Calderazzo on piano, Eric Revis on bass, and Justin Faulkner on drums, while Marsalis played saxophones, the audience was treated to truly fantastic, masterful, jazz. The night began with two original compositions by members of the quartet: the challenging and difficult “The Mighty Sword” by Calderazzo, then an equally engaging but slower and quieter composition by Revis. The contrast of the two pieces truly highlighted the strength of the quartet, as they were equally moving and impressive with the first flashy piece as with the second, more languid piece.

The Branford Marsalis Quartet also put their unique twist on familiar compositions by jazz greats Thelonius Monk and Jelly Roll Morton, even George Gershwin. And of course there were the requisite solos by each member of the quartet throughout the night: impressive solos that masterfully exhibited the talent and skills of each musician. One drum solo in particular brought audience members to their feet in appreciation, so there was no surprise at the end of the concert, when there was an immediate and enthusiastic standing ovation that brought the quartet back for a fantastic encore, despite Marsalis’ comment that the quartet didn’t know their encore very well.

The best summary of the night came at the end, when the Dean of the College of Arts and Humanities at UMD, Bonnie Thornton Dill, said that she had not been “challenged, enthralled, and engaged” at a concert in a long time. And the audience agreed. The Branford Marsalis Quartet did indeed challenge, enthrall, and engage the audience in a way that they will not soon forget. 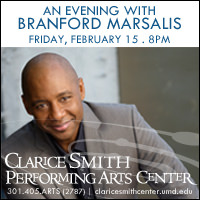 An Evening with Branford Marsalis performed for one night only on Friday, February 15, 2013, at 8 pm at the Clarice Smith Performing Arts Center—3800 Clarice Smith Performing Arts Center at the intersection of Stadium Drive and Route 193 (University Boulevard) at University of Maryland in College Park, MD.  For upcoming events, please check their calendar.