On Thursday night, while waiting for the GWU New Plays Festival’s wild42hold to begin, I was transported to an attention-grabbing site. Thanks to the massive set, covered in graffiti, a la Banksy, and the pre-show music (featuring “Let Me Love You” by Ne-Yo, and “It’s Time” by Imagine Dragons), I knew we would be visiting a contemporary, moderately urban setting. 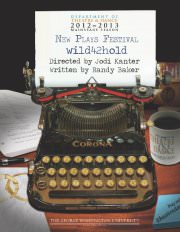 The play starts with a beautiful monologue by soldier Valerie Stein, played by Lauren Winters. She speaks of stars and their constellations, and then briefly touches on Afghanistan. When the lights fade, we know little about this intriguing character; a void that is later remedied. Lights up on a parking lot/abandoned parking structure. We see a tense assembly of “twenty-somethings,” a homeless man named Harkness (Ed Churchill), and “by the book Detective” Danielle Merchant (Rachel Johnson). As the scene unfolds, we realize everyone is gathered as the police investigate what happened–during last night’s rave–to Katie Powers (Madison Awalt). What role did each twenty-something play in her downfall? Was homeless Harkness involved? And, who is the mysterious soldier we met at the top of the play?

Randy Baker has created a cinematic play, with unexpected twists and turns abounding. The episodic nature of his plot, and moderately predictable structure, anchor the work. My favorite passages are the monologues as various characters add pieces to the “What happened to Katie Powers?” puzzle. These passages were delivered with special vitality. I was enraptured by their descriptive nature, and quickly transported to the physical, or emotional landscapes that the actors described. Being a new play, literally on its feet for the first time, there are challenges and portions to be fine-tuned. Some transitions, in my opinion, were a little unnerving. These occurred when going from some characters’ description of past events to the present, or when moving from monologue to dialogue. I noticed a stark difference between the monologues and dialogues, in terms of language and flow. They could have been due to any number of things, intentional or otherwise.

All in all, this creative new work has much promise. Baker’s characters are brought to life by the fresh talent of the GWU students who portrayed them. wild42hold ‘s stand-out performances included Madison Awalt (Katie Powers), Ed Churchill (Harkness), Rachel Johnson (Detective Merchant), and Lauren Winters (Valerie Stein). Awalt’s dynamic character lays behind the twenty-somethings being questioned by the cops in the second scene. Miss Awalt’s truly unique energy and magnetism lived up to all of the talk about her character. You could understand what drew Katie Power’s peers to her. You wanted to be Katie’s friend. Churchill does a commendable job as Harkness. It was particularly insightful to see his character in a flashback to a time before he was homeless.

The before and after similarities created this multi-dimensional person. Rachel Johnson is a delight as pragmatic Detective Merchant. She displayed a remarkable balance between authority and discomfort, and is a steady figure throughout the flow of the play. When dynamics move the plot to an extreme, she holds her character’s ground and anchors the piece. Her flashback to a simpler time gives depth to her in the present. Lauren Winters gives a solid performance as soldier Valerie Stein. She has seen things that many in the audience may never have experienced, but that doesn’t matter because Winters’s performance shows her pain. A flashback allows us to see a lighter (though definitely troubled) person. Other strong performances include Madeline Hendricks’s spunky and angsty Laurel Stein, and Marcelene Sutter who brings energy to intern Natalie Sampson.

Jodi Kanter’s direction is solid. She punctuates the dynamic moments with interesting stage pictures. She utilizes the massive set a couple times, but I wished more the action might have taken place atop the graffiti-clad structure. She created a nice flow into each of the flashbacks, although returning to the present was a little choppy at times. All in all, I thoroughly enjoyed the aesthetic she brought to this new work.

The scene design by Tiffani I. Corley Sydnor is stellar. From the minute I walked into the theatre, I was transported to the play’s setting thanks to the graffiti-covered parking structure. Aaron Pollon’s lighting design gets the job done, and the lightning effect is especially successful. Jie Yu’s costume design presents each character with his/her own distinct look. The sound design by Amanda Newman is effective at times, especially pre-show and in flashbacks, but the ever-present Avicii-light stylings were a bit much toward the middle and end of the play.

All things considered, I found wild42hold to be an entertaining evening. I commend GWU for bringing DC playwright Randy Baker to work on this project and to create a new piece, tailored to the students playing the roles. Collaborations like this really set up what the real world is like for students, and allows a professional in the industry the chance to work with people eager to learn. Make sure you catch this play in its raw state. The magic of live theatre is present in the Dorothy Betts Marvin Theatre this weekend.