The Lopez Conservatory Program presents The Little Mermaid Jr., based on the Hans Christian Anderson story and Disney film, with Music by Alan Menken, Lyrics by Howard Ashman and Glenn Slater, and Book by Doug Wright. While the music is adapted for the stage and arranged by David Weinstein, the hit songs that your children (and you!) grew up loving are just thrilling as ever! Director and Choreographer Jennifer Kessler leads a talented ensemble of young actors and singers performing one of our culture’s most beloved stories.

Set Designer Keegan Cassady keeps the stage minimal, using an easily-dissembled pirate ship, a couple painted backdrops, and not much else. The rest is up to the large cast, who in themselves become set pieces; kids draped in flowy blue cloth sway on the floor, becoming waves, while others sit as if frozen, holding small props. This creative aspect lends an imaginative air to the production, which is greatly appreciated in children’s theatre. Lighting Designer Jeffery Miller projects rolling blue waves onto the floor, as well as impressive lightening strokes during a hurricane scene, with accompanying thunder by Music Director Heather Konovalov. 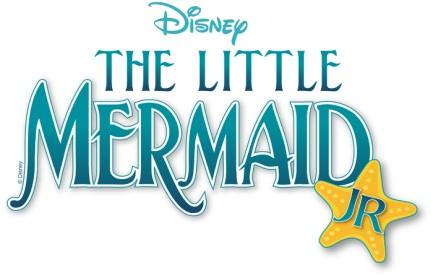 Costume Designer Jennifer Kessler uses vibrant colors of the sea for her mermaids, who shimmer across the stage in rippled, glimmery dresses and wavy hairstyles to match. Seagulls have feathered collars and cuffs, and sailors striped shirts and caps, but the most unique costumes have to be those of Sebastian, who dons a sparkly red tailcoat, and Ursula, whose many scarves tied around her waist each has its own actor holding the end, manipulating the “tentacle” as if it were a slithery puppet. There were some sound problems at my performance – a piercing microphone feedback interrupted the performance I attended on a few occasions. I am confident that that problem was fixed for the rest of the run.

When Ariel’s (Caroline McQuaig) sisters sing a cheery song called “Daughters of Triton,” they turn to introduce her…only to find empty water. Sitting on a surface rock, the discovery of a fork has driven the concert from Ariel’s mind, and instead she sings a song called “Human Stuff” with her friend seagull Scuttle (Vanessa Bliss) and the adorably pouty Flounder (Gia DeChristopher). Ariel loves human things, and sings about her desire to live amongst them in the famous, wistful song, “Part of Your World,” which McQuaig sings beautifully. Tension arises between her and her father, King Triton (Alex Rudison), who does not trust humans.  Triton’s anxiety-ridden side man Sebastian (Livi Jung-Moss) tries to distract Ariel with the upbeat song “Under the Sea.” This number has great group choreography, and shows the young cast working well together. Sebastian’s efforts are useless, however, as he finishes his song and turns to find the space where Ariel stood empty.

A hurricane sinks the ship of Prince Eric (Andrew Craver) in a fantastic scene where actors dressed as waves toss around Ariel and Eric in rough waters. Ariel manages to save him, and as she sings to awaken him, her voice comforts him. The two become equally determined to find each other again—Prince Eric sets out to find the girl that matches the voice he fell in love with, and Ariel visits the sea-witch Ursula (Megan Hubbell), who shows great comedic timing) in hopes of striking a deal. After a great rendition of “Poor Unfortunate Souls,” Ursula proposes a bargain: Ariel’s voice for legs, and the understanding that if Prince Eric does not kiss her in three days’ time, her soul would be lost forever! What follows is an adventure, including a great scene where Sebastian is chased around the palace kitchen by Chef Louis (Evan Kohnstam, who sings a funny version of “Les Poissons”) and the lovely “Kiss the Girl,” sung by Sebastian and ensemble.  Sacrifices are made, relationships are threatened, and trusts are broken. Will Ariel be able to convince Eric that she’s the one he’s looking for…without her voice?

With such a young cast, one must keep in mind that their talents are still developing. The performances could use polishing, but the cast is energetic, and you can tell that they are having a blast doing what they love, with some real talent brewing.

I encourage you to take your child to see their peers perform one of their favorite shows, The Little Mermaid Jr. They will be both entertained and inspired!

The Little Mermaid Jr. plays through April 13, 2013 at The Industrial Strength Theatre — 269 Sunset Park Drive, in Herndon, VA. All Shows are SOLD OUT.  If you would like to be placed on the “WAIT LIST” for additional shows they may add, please EMAIL a request!