In his Director’s Notes, Paata Tsikurishvili quotes a line from Hamlet: “Suit the action to the word, the word to the action.” In its latest show, The Three Musketeers, written by brothers Ben Cunis and Peter Cunis, Synetic Theater does just that, including spoken dialogue along with the physical movement that so beautifully characterizes their shows.

D’Artagnan (a cheeky Dallas Tolentino) follows his dreams to Paris, where he hopes to become one of the King’s Musketeers. The Musketeers, Athos (a dashing Ben Cunis), Porthos (the wacky Hector Reynoso), and Aramis (a flirtatious Matthew Ward), have other ideas. The young upstart D’Artagnan, quickly finds himself scheduling duels with each Musketeer. The group finds themselves battling the guard kept by Cardinal Richelieu (a stern Dan Istrate), the manipulative advisor to a flighty King Louis XIII (a delightfully quirky Robert Bowen Smith). The king is having his own problems, concerned about whether or not his wife, Queen Anne (a lovely Brynn Tucker) is having an affair with the British Prime Minister, the Duke of Buckingham (a striking Mitchell Grant). Buckingham ends up with diamonds that the King gave to the Queen and which could prove to be both their demises, as well as trigger wars, if D’Artagnan and the Musketeers don’t intervene. In the meantime, the Cardinal’s agent, Milady (a seductive Irina Tsikurishvili) weaves in and out of the story in the Cardinal’s plot to bring down the Queen, stealing the King’s trust for himself.

Synetic Theater creates scenes full of life and movement in its fights (fight choreography by Ben Cunis) and dances (choreography by Irina Tsikurishvili.) In fact, Irina Tsikurishvili (Milady – Athos’ former wife), and Cunis (Athos), have the most emotional scenes in the show. Their dances together remind us that, sometimes, those we love deeply are not those with whom we can live. Love, lust, and loathing blend together to create beautiful scenes between the two characters/choreographers.The design elements infuse this world with color and flare. Set and Costume Designer Anastasia R. Simes’ work is larger than life, much like the seventeenth-century French court and country in which the show is set. Its multiple levels provide engaging staging areas for fights, dramatic leaps, and other forms of staging. Lighting Designer by Brittany Diliberto aids this representation, providing stark highlights and contrasts exactly when needed. Sound and music by composer/musical director Konstantine Lortkipanidze and Sound Designer Thomas Sowers provide a fantastical background, ranging from lovely melodies to comical sound effects.

Though Synetic should be commended for its versatility in infusing some of their shows with spoken dialogue as well as movement, it is their movement work, naturally, that truly shines. In scenes with actors and characters of different nationalities, deciding on correct and/or uniform pronunciations for words and character names is helpful, particularly when some of those words are in a foreign language (French, in this case). While, at times, the dialogue is less robust, the choreography and fight choreography, by, as mentioned above, Irina Tsikurishvili and Ben Cunis, respectively, take this show to another level, both figuratively and literally.

Director Paata Tsikurishvili mentions, to specialize in “purely visual imagery and non-traditional storytelling,” continuing to make Synetic Theater one of the most innovative, exciting theatres around. 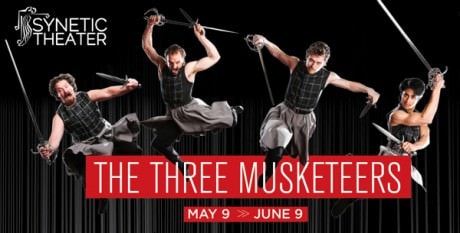