From Directors Deborah and Delia Taylor:

“The first assignment for our acting students was dramaturgical, following Stella Adler’s principle: “The most important thing you can teach actors is to understand plays. The term ‘script interpretation’ is a profession; it’s your profession. From now on, instead of saying ‘I’m an actor,’ it would be a better idea for you to say ‘My profession is to interpret a script.’” Each student was given a topic to report on: the setting; playwright’s biography; themes of addiction, taboos, guilt and secrets; genre and style; cultural, sociological, historical and literary references.

We were delighted with the results. All the presentations were thoroughly researched and well delivered, and led to lively and fruitful conversations worthy of any graduate seminar. Their investigations, we believe, have generated layers in their individual characterizations that, quite frankly, we had longed to see more of in the several professional productions we have seen. Two summaries of individual research are included in this program; in addition, the insights of several others are reflected in these notes.

This play, which at face value seems so quintessentially American, has in fact been performed world wide in a myriad of languages. (Oklahoma! in Germany?! In Japan!?) The universal acceptance of Letts’s prize-winning play would seem to show that the relationship between dysfunction on the family level reflecting the destruction of social structure on a national level is an international quandary. Like Edward Albee and many other American playwrights, Letts does not allow his work to be escapist.  He forces us to witness our serious flaws. While highlighting the disintegration of a modern American family, Letts shows how addiction in its many manifestations traumatizes every member of a family and mirrors the larger world. Interestingly, the concept of a dysfunctional family is quite recent; the expression was first coined by John Bradshaw in his 1988 book on the family. Although we now see the term as somewhat trite, we all recognize it in action. And nothing about this play seems old hat.

Letts shows us the Weston family in its final disintegration with savage humor, rage, violence, and pain. “We share the multi-generational conflict that inevitably arises when Those Who Have Nothing have willed their pride and guilt to Those Who Have Wanted for Nothing.”  And yet he seems to offer some hope. Perhaps the three Weston daughters have found an escape at play’s end? Maybe granddaughter Jean will find an alternate reality to the alternate reality of film.

Although this troupe has been especially sensitive to the characters they are portraying, they themselves are far from dysfunctional. Indeed it is hard to imagine a more cooperative, more responsible group. They almost magically see a need and a way to solve it. Before we could say “dysfunction” Steve Malone had built us porch and study platforms. Similarly cast members contributed ringing cell  phones, ottomans, “liquor” bottles unasked. We are so grateful to have been part of this wonderful functional “family.”

Special thanks to our own family, John and Rebecca Taylor; to photographer Olivier Long for offering his services and Fight Director Paul Gallagher for his invaluable contribution teaching us safe stage violence. And as ever we offer our heartfelt appreciation to The Theatre Lab family for making this possible.”

“Creating the character of Jean Fordham has been both challenging and extremely cathartic. On the surface, Jean and I are comically different, starting with the fact that she is 14 and I am 25. Our internal lives, though, are strikingly similar. Jean is struggling with her parents’ separation and the legacy of alcohol and drug abuse in her extended family. Those are challenges with which I am intimately familiar.

For me, this year has been about coming to terms with the divorce of my own parents, and learning to love my family as they are. To be able to channel those emotions through Jean, to use them to create art, is exhilarating. This play has allowed me to use a dark period in my own life to bring a character to life.”

“Recently graduating from the Theatre Lab’s Honors Conservatory, I found myself thrust into the acting world with a new found skill set and without the safety net or comfort of mentors and classmates. This course came around during a time of personal need as an actor. After working on August: Osage County, under the direction of Debby and Delia Taylor, I am now able to confidentially approach and analyze scripts.

I also understand how to personalize character development along with the significance and absolute necessity of comprehending the overall piece. The challenges I have encountered throughout the course have been instrumental in grounding myself as an actor and I had the opportunity to attempt different approaches while creating the fully realized role of Johnna as I saw her. Some exercises were more  helpful than others, but the process of the various methods eventually led me to what I hope is an honest yet unique portrayal. I recommend this course to actors at any stage in their career. The lessons to be learned are endless, and those I have gained, I will cherish throughout my acting profession.”

Playing Mattie Fae Aiken has afforded me the opportunity to learn how to create credible relationships onstage through building the appropriate energetic dynamic with fellow actors while off stage during rehearsal. The depth and richness of my character’s interactions with key cast mates, like Violet Weston (sister) and Charlie Aiken (husband) has as much to do with how we deliver the lines as it does with how we relate to each other physically. I have learned that the subtle, non verbal aspects of relationship convey far more strongly to the audience than I had realized

In terms of challenges, the course is structured to remove most of them. Working with two directors has proven challenging for me at times, but certainly never in an insurmountable way.”

I’m playing Ivy Weston. I am grateful for the colorblind casting choices that were made in this play. Race is unimportant; what is important is the connections the actors form and how they react to each other. I have learned to be assertive and express my ideas – for character development, music, props, blocking, etc. — because both the directors and cast have made it such a safe and supportive environment for doing so.

We once did a run without calling for lines, just to see if we could still get through the whole play. I learned some things about how to recover a scene when it goes awry due to forgotten lines. I found that if you trust your fellow actors, they will always come through!” 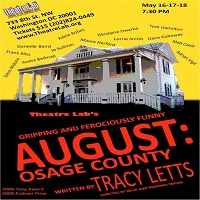