Thursday, May 16, 2013 was the opening performance of the NSO’s concert The Wizard and I: The Musical Journey of Stephen Schwartz, with four of Broadway’s best singers performing some of Schwartz’s hit songs. It was indeed a magical evening, filled with energy and excitement, capped off with a special appearance by Stephen Schwartz himself.

Stephen Schwartz is a prolific composer for Broadway, film, and even opera and choral pieces.  He brought us Wicked, Godspell, and Pippin (currently back on Broadway and nominated for a whopping 10 Tony Awards!). Joining the NSO conducted by the energetic Steven Reineke, were Jennifer Laura Thompson (former “Glinda” in Wicked), Julia Murney (a former “Elphaba” in Wicked), Jeremy Jordan (Newsies ), Norm Lewis (The Gershwins’ Porgy and Bess), and The Washington Chorus, all paying tribute to the 10th anniversary of Wicked and Stephen Schwartz’s 65th birthday with a fantastic concert composed entirely of Schwartz’s music.

The evening opened with an excellent orchestral medley of songs from Wicked. The NSO was in fine form, playing with energy and enthusiasm, giving the familiar music a lush, full sound that really enhanced the experience. The energy and enthusiasm of the orchestra continued throughout the night, and was very infectious.The first song of the night, “Spark of Creation” from Children of Eden, was sung by all four vocalists, who came out dancing, and toe-tapping, while singing with zeal and gusto. Their enthusiasm (shared by the fantastic Washington Chorus as well) really made the night fun and very entertaining.

Jeremy Jordan sang the first solo of the evening: “Lost in the Wilderness” from Children of Eden. Jordan’s smooth, clear voice was beautifully matched to the song. Jordan won over the audience with his enthusiasm and vocal power and skill, as he very clearly made the song his own.

Julia Murney tackled the beautiful yet notoriously difficult “Meadowlark” (from The Baker’s Wife) with her distinctive voice and characteristic power—Murney especially is very good at not simply singing a song, but acting it as well, and making the audience feel what the character is feeling.

Jennifer Laura Thompson was next, singing the lovely “West End Avenue” from The Magic Show. Thompson has a very distinctive, bright voice, which she used very skillfully to create the atmosphere of the eponymous West End Avenue.

Contrastingly, Norm Lewis sang the popular “Magic to Do” from Pippin. Lewis’ rich velvety voice is lovely to hear, but Lewis’s showmanship really brought down the house as he drew the audience in and made each person feel as if he was singing to them and them alone. The distinct personalities and styles of each singer really came together to form an entertaining, cohesive concert, as they continued to sing songs from Godspell, and a crowd-pleasing medley of songs from Schwartz’s movies: The Hunchback of Notre Dame, Pocahontas, and Prince of Egypt.

The high points of the night came near the end of the concert.  he Washington Chorus sang a beautifully moving choral piece called “Testimony,” written by Schwartz for the “It Gets Better Project,” a project that sends messages to LGBTQ teens from adults, letting them know that life gets better. The first part of the piece is composed entirely of the words of some of these LGBTQ teens, expressing their despair and self-loathing, while the second part is the message of strength to these teens, telling them that life does indeed get better. It was beautiful and moving and the Chorus sang it with feeling. Clearly this is a cause and a piece near and dear to Schwartz’s heart.

The audience was treated to a very special treat: Stephen Schwartz himself came onstage and discussed the process of writing the song “The Wizard and I.” This discussion including Schwartz singing snippets of the song he wrote before “The Wizard and I” called “Making Good” until his Director/son Scott suggested his Dad scrap the original song and start over. Then, when Julia Murney sang (in a green dress, no less!) “The Wizard and I,” she brought down the house with her vocal prowess and superb acting.  She conveyed clearly the character’s idealism, hope, and excitement, helping the audience to truly feel the song, not just listen to it.  It made for a very affecting performance, which continued during the duet “For Good,”, sung superbly and movingly by Murney and Jennifer Laura Thompson (in a pink dress, a nice nod to the “Glinda” character). It was a crowd-pleasing performance, with power, energy, and sincere emotion.

The encore was also a highlight.  Schwartz himself came back to sing his song “Can You Imagine That” from The Fairy Tale, with all four soloists, as well as The Washington Chorus. While each singer will have an interpretation of a composer’s work, hearing a composer sing his own songs allows the audience to see and hear the song how the composer intended, which is a unique experience. And indeed this encore was that: Stephen Schwartz’s heartfelt rendition blended beautifully with Murney, Jordan, Thompson, Lewis, and The Washington Chorus who delivered a rousing, spirited final number, a fitting cap to this lively and special evening. 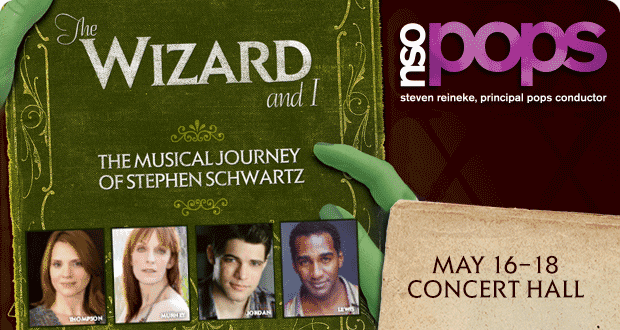