Sometimes the biggest talents come in the youngest packages, and there are plenty of both in the new staging of Songs for a New World by TYA (Teaching Young Artists) at the Drama Learning Center in Columbia.

Director Stephanie Lynn Williams mines the full potential of this self-described “song cycle” as a teaching aid. Instead of the usual cabaret-style cast of four bolstered by an ensemble, Williams spreads the vocal wealth around, giving solo spotlights to nearly every performer in her 20-plus member cast. The 1995 off-Broadway cult hit doesn’t really have a plot, and though composer-lyricist Jason Robert Brown insists it is not a revue, it’s hard to call it anything else. It has become such a favorite with small theaters and community youth groups around the world that one is tempted to dub it Jacques Brel Jr. Is Also Alive. 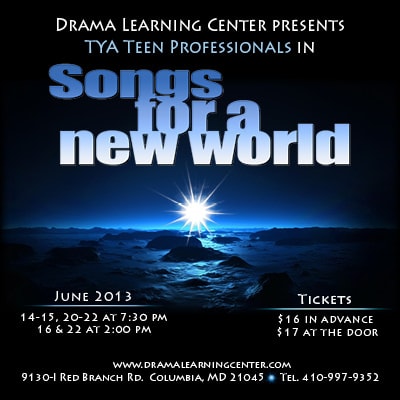 One reason for the show’s popularity with young people is its lyrical optimism, as expressed in the recurring title song and elsewhere. Even though the songs often deal with disillusion, estrangement, depression, self-doubt, imprisonment and fear, they are typically offset by positive expressions of love, contentment, commitment, hope, dedication, and faith.

The high school-age cast at the Drama Learning Center has no weak links, and several of the singers on stage come off as stars-in-the-making. A few of the male falsettos are clearly venturing out of their comfort zone, and some of the female voices seem to be opening up for the first time. But what is the point of a vocally demanding showcase if not to watch young artists stretch

Whenever the whole company is engaged, the performers instantly command attention with their choral mastery. Music Director Tiffany Underwood Holmes is outstanding at moderating the dynamics of different voices to achieve  harmony. She also oversees the live four-piece band that gives the entire show its assured pace and cohesion.

In roughly the order they appear: Emma Rothfield guides us to the hope of “The New World” with an awesome assist by guest-artist extraordinaire Troy D. Hooper, an alumni with seemingly limitless lung power and stage charisma. Graduating senior Anna Wehr gives a peek into the heartache of romance on the rocks in “Just One Step,” while Carter Grove sings sweetly of a whole host of fears in “I’m Not Afraid of Anything.”

Alex Rothfield and Christina Schumacher find rhythm in defiance with “The River Won’t Flow.” Laura Taylor, another recent graduate making her final stage appearance at TYA, gets the laughs and poignance from the score’s best-known novelty number, “Stars and the Moon,” about the illusion of material fulfillment. Nick Mercer expresses the helplessness every male feels when “She Cries,” and Seth Fallon sets the whole house chugging toward intermission with “The Steam Train.”

Poignance mixes with nostalgia in “The World Was Dancing,” thanks to Alex Rothfield and Meredith Beisel, with able vocal support from a female chorus.

Alaina Kahn, a sophomore at Liberty High, shows the potential of being a real belter and crowd-pleasing comedienne in “Surabaya Santa,” while Claire Cerand finds reverence for a new life growing within her in the touching “Christmas Lullabye.”

Brady Stevens musically proclaims himself “King of the World,” ignoring the fact that his world happens to cover only the geography of a prison cell. Seth Fallon and Sophie Smith blend well in the lovely duet “I’d Give It All For You,” and Katie Bogdan expresses searing bitterness at the waste of young lives in “The Flagmaker.” When Brady Stevens joins with Emily Reiss to lead the entire company into the final song cycle, the result on opening night was a well-deserved standing ovation.

On the technical side, Cory Jones does another masterful job with his Lighting Design, and Carrie Loughry gives the show a painted backdrop that delivers the idealistic vision of a new world that this wonderful evening of musical theater is all about.

Running Time: Approximately One hour and 40 minutes, with a 15-minute intermission.