Actor Russ Widdall on being Bobby

That year is identified as both the end of the Baby Boom and the beginning of Generation X. Straddling these two eras gave me a respect for the vastness of history and my place in it. I was also the youngest of five children, which strengthened my connection to the past generation. My older brothers and sisters often recalled with vivid memories the assassinations of the Kennedys. Those two moments found prominence in an already troubled decade. I could easily understand the tragedy of a fallen president, but when that president’s younger brother was also taken, I had to wonder—What was it about these men, this family, that made them so important, and so feared?

I was particularly drawn to the story of Robert Kennedy, as I was myself a little brother. I’ve come to respect the uncommon bravery and selflessness of the path he traveled. Beyond being respectful of his achievements, I became fascinated with what drove him: Brotherly love? Patriotic duty? A deeper, more paternal sense of honor?  Possibly vainglory?

A lot of ground was covered in these four years. Jack Holmes’ play RFK begins with Bobby receiving a call from Lyndon Johnson denying him the 1964 Vice Presidential bid. From there, Bobby takes us through his stint as Attorney General and his confrontations with the likes of Jimmy Hoffa, George Wallace, and J. Edgar Hoover, his truncated senatorial and presidential campaigns, and his overwhelming reactions to the assassinations of his brother John and his fellow crusader Martin Luther King, Jr. Retracing the steps, and emotions, of that journey has been as humbling as it has been fulfilling. The what-could-have-been is inescapable in the story of Robert F. Kennedy. The hardest part of playing this role is letting Sirhan Sirhan blank out the unwritten history of the 1968 election each night.

Some nights I want to ride the idealistic wave: enact Bobby’s promised de-escalation inVietnam, pass more comprehensive Civil Rights legislation, brave the inevitable criticism and controversy into the phantom second term. Some nights I want to believe that this country got better than we deserved, that we got a full life out of Robert F. Kennedy. When the shots ring out at the Ambassador Hotel, I know it cannot be, but I hope that people can see how close we might have come to finding the newer world that Robert Kennedy sought.

I hope you enjoy coming along for the ride. And that the little brother in all of us finds his place in the family.

* Member of Actors’ Equity Association, AEA, the union of professional Actors and Stage Managers on the United States.

#  The director is a member of the Society of Stage Directors and Choreographers Society, SDC, a national theatrical labor union. 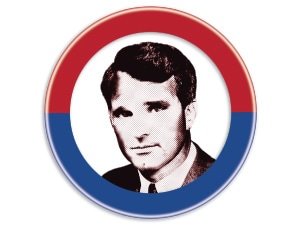 Running time:  95 minutes.
Recommended for ages 13 and up.