Outside the Wire is a compelling and moving portrait of the toll war takes on soldiers and their families. Written by Jimi Stanton, who plays Sargent Mark Mercer, the lead, the play follows the members of a platoon deployed in Iraq and traces out the difficulties Mercer has when he returns home to resume life with his wife and child. The actors’ work on the stage is supplemented by interviews with them flashed intermittently on a screen above the stage, as though they were in a documentary. The play, in fact, begins with this footage. All five actors are so terrifically convincing that for a while I was fooled; I believed I was watching interviews with actual soldiers. When the same actors appeared on stage I realized my error but remained stunned at the quality of the acting. 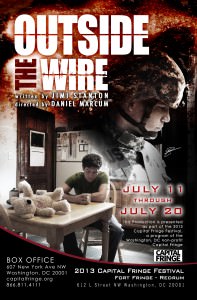 A play like this—running two hours with no intermission in the sweat lodge known as the Redrum—needs a skillful director and Daniel Marcum is awesome. Though serious, the play is never heavy-handed. Marcum manages to load each scene with tension and emotion. I was kept on the edge of my seat. I was moved at times to tears.

The platoon members enumerate their reasons for joining the army, including the privilege of standing up for what they believe in. What, exactly, that is and how fighting the war is a way of standing up for that is never explained. A song (“Love Vigilantes”) played as the last video clip rolls on the screen argues that the war must be won “in the name of truth.” The play’s one weakness is that the complexities of the Iraq war are ignored—was it fought for truth? To save us from the mushroom cloud? The focus is kept narrow. When Sargent Mercer questions what the costs of his service were, he is speaking only in terms of himself and his family. But this is not a play about the 223,000 or so Iraqi deaths brought about by the war. Outside the Wire stays solidly within the realm of the hardships war imposes on US service members and their families. In this endeavor, it is remarkably successful—a tour de force well worth seeing.

Outside the Wire has one more performance on this Saturday, July 20, 2013 at 1 PM at Fort Fringe-Redrum – 612 L Street NW, in Washington, DC. Purchase tickets here.