So, it’s a Friday night and you had it with a week of work and all you want to do is crash. Now, it’s Saturday night and you want to find a great place to go on a date. Fret no more…I have the perfect recommendation for you. Do you know the answer to this question…”Who Put the Mock in Democracy?” If you answered the Capitol Steps, you are absolutely, positively ‘right.’ No, really, I mean ‘left.’ The Capitol Steps have been combining material from both the left and the right of the political spectrum for over 30 years and are still able to get it correct and attract a sizable audience. Each performance is ‘fresh’ and unique with different surprise guests.

In 1981, Steps Co-founders Bill Strauss, Jim Aidala, and Elaina Newport were responsible for entertainment at Senator Charles Percy’s Christmas party. Like most things in Washington, the Hill staffers moved on and have since recorded over 33 albums and appeared on National Public Radio’s All Things Considered dozens of times. For the past 20 years, they’ve produced quarterly holiday specials for public radio and three national specials for public television. Bill Stauss passed away in December 2007 and Elaina is now script writer/co-performer/Producer. Listening to a Capitol Steps radio performance an/or watching them on TV is fun – but there’s no substitute watching them perform live.

Is anyone safe from the claws of our Capitol Steps?

The Steps use entirely different costumes in each vignette, which helps to propagate the idea that there is a huge cast. You eventually discover how few Steps participate in the performance realizing that the costumes, accents and wigs help to disguise that fact. All of these (in)famous individuals were played by six incredibly versatile performers: Morgan Duncan, Mike Thornton, Mike Carruthers, Mike Tilford, Elaina Newport, and Janet Gordon ably assisted by the talented Dave Kane on keyboard. One should note that nothing is sacred as you listen to each parody of the latest news events. 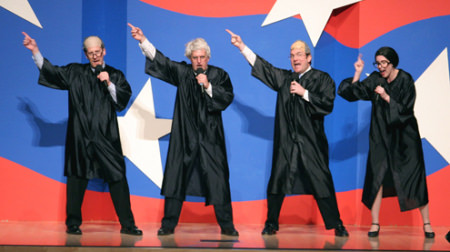 In the first three minutes The Steps hit a home run when they announce a very funny ”silence your cell phone” announcement, and the non-stop laughter kept coming …The Capitol Steps’ timing is superb. If you don’t keep up, the “Steps” may be three jokes ahead of you, so you have to listen carefully while you’re laughing so hard.

First up was Capitol Steps’ performer Morgan Duncan who portrayed President Obama as he dialogued on his latest political accomplishments. Near the end of Act I, one of the Steps focused on our current political situation which is named “Lirty Dies”- where consonants are switched from the original “Dirty Lies.” It develops into quite a routine and tonight’s epistle resulted in hysterics as they raked Eliot Spitzer and Anthony Weiner over the coals.

It’s not just narrative….it’s music too. In fact, when a news items is being considered – The Steps determine what rhymes with it and what classic or popular songs’ lyrics would provide the most humorous response from the audience. Some of this evening’s parodies came from a multitude of theater, folk, and movie songs including The Little Mermaid’s “Under the Sea,” Evita’s “Don’t Cry for Me Argentina,” South Pacific’s “There’s Nothing Like a Dame, Simon and Garfunkel’s “The Boxer,” West Side Story’s “Maria,” Elvis Presley’s “My Way,” Bye Bye Birdie’s “Lot of Livin’ to Do,” and my favorites – a parody of “Twinkle Twinkle Little Star: a high-carb tribute to Governor Chris Christie,” parodying Simon and Garfunkel’s “The Boxer”- with an investigating Congressman and a Press Secretary duking it out, and a funny take on Elvis Presley’s “In the Ghetto,” which takes place on our transit system that has all those broken escalators.

There’s more to the Capitol Steps than their humor, and these two themes sums it up pretty well: “A Big Thank You to the American Voters- you’ve made our job so easy” and “It’s not our fault…You elected them!”

Capitol Steps plays indefinitely every Friday and Saturday Night at the Ronald Reagan Building and International Trade Center – 1300 Pennsylvania Avenue NW, in Washington, DC. For reservations, call Ticketmaster at (202) 397-5328, or purchase tickets online.  Four casts may be scheduled all over the USA at any particular time, so it’s best to check the website to determine if they might be playing in your neighborhood.