Dancing in the Wings, a musical by Debbie Allen, returns again to the Hylton Performing Arts Center on George Mason University’s Manassas Campus. Adapted from the 2000 book by Debbie Allen and Kadir Nelson, this crowd-pleasing, Grammy Award-winning family friendly musical has something for everyone with fast-paced dialogue, exceptional singing, and a cast of young actors and adults who earn high marks for stage presence and vocal execution. Directed and script-adapted by Tyrell Lashley, it draws its strength from the catchy lyrics by Andrew “Tex” Allen; James Ingram, and Debbie Allen), musical direction by Angela Somers, and choreography by Kay Harris and Catrina Stroman. 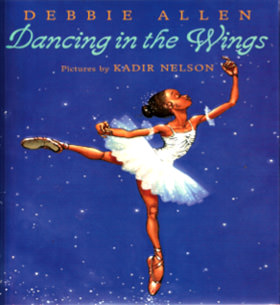 Set in Inglewood, California, Act I opens with a dazzling colorful array of teen girls (Bad Girls: Morgan Dyson (Mona), Samantha Black (Molly), MyKenzie Bodekor, Alycia Fleming, Ayanna Fleming, Avianna McFarquhar, Taliya McFarquhar, and Naudia Terry) in traditional ballet costumes and younger girls (Dancing Ants: Carmen McFarquhar, Kori Byrd, Madison Wildman, Mia McMillion, Mya Jackson, Nya Harris, and Saphi McFarquhar) in contemporary neon-colored tops and dark pants. In their midst we see Big Sassy (Jordan Oliver) attempting to dance as well as the other girls only to stumble and fall over her clumsy feet. She believes in her dream to become a ballerina but becomes discouraged when all the girls smirk at her attempts. She is too tall, her feet are big, and she lacks confidence in herself. And if that is not bad enough, Sassy’s own brother, Hughie (Tre’Shawn Jones) calls her “Flipper” when he sees that she cannot fit her feet into a new pair of roller skates.

Sassy’s mother, Rhonda Oliver (Mama) offers continuous support of her dream. Struggling to maintain belief in herself and to stand out from her competitors: Principal Dancers Alia Wiggins, Jasmine Murray, and Kharrie Wimberly, Sassy goes to ballet class led by Miss Katherine (Kay Harris). Unintentionally, Sassy manages to trip Ms. Katherine with her big feet. Although quickly admonished for her big feet and inappropriate bright yellow tee, Ms. Katherine nevertheless, encourages her to keep trying, as The Plumettes sing, “I’ve Been Dancing in the Wings.”

Not too long after that, an opportunity to audition for a part in New York is announced at Sassy’s high school. Continuing their taunting ways, the Bad Girls continue to diss Sassy and she leaves crying. But the best is yet to unfold in Sassy’s life. Her Uncle Redd (Jonathan M.C. Oliver), singing “I’m a Plumber (Uncle Redd’s Blues)” is just the further encouragement she needs to boost her confidence and make an unwavering commitment to ballet.

In Act II Jashaad Santiago-Boatwright, supported by teen girls and The Plumettes, is spotlighted in the song “I Like the Girls.” In keeping with the fast pace of the musical, all the Ants and Boys continue to dance around the stage. The final song “Mama’s Lullaby” spotlights the impressive singing talent of The Plumettes, especially Rhonda Oliver. I also appreciated Asjah Benson’s acting and singing ability as well as the confident vocal delivery of Jordan Oliver, whose dancing was superb. And to my pleasant surprise, in his first time on-stage performance, Jonathan M.C. Oliver was near-perfect in acting and singing ability.

The musical concludes with Sassy winning the lone spot to dance under the tutelage of Miss Debato (Renita Cole) whose acting and diction I enjoyed immensely. I also enjoyed Kay Harris (Ms. Katherine) for her superb diction and stage presence. For the audience, Dancing in the Wings encourages all kids to keep believing in themselves, remember their dreams and to stand up for themselves when life gets difficult.

Running Time: One hour 15 minutes, with one 15-minute intermission.

Dancing in the Wings continues performances on September 14, at 2:00 PM and 7:00 PM, and September 15 at 3:00 PM in the Gregory Family Theater at Hylton Center for the Performing Arts – 10960 George Mason Circle, in Manassas, VA. For tickets, purchase them online.

Audrey Thornton’s first review of Dancing in the Wings on November 18, 2012.