People all too often associate Chekhov with dreary, serious, and emotionally draining. But there is a much lighter and comic side— even if the comedy is in a dark vein— to the great Russian playwright’s work. Continuing through their season that is populated with collections, short works, and vignette style works, the Fells Point Corner Theatre brings 4 By Chekhov to the stage in hopes that bringing some humor to the area theatre scene will welcome spring that much sooner. Directed by Howard Berkowitz, the jaunty romp highlights some of Chekhov’s finer comic high points and keeps the audience entertained with a bit of off-colored humor in the process.

Finding a universal parlor style setting to fit four different Chekhovian one-acts falls on the shoulders of Set Designer Tony Colavito. Creating a simple set that has hints of elegance and a time gone by, Colavito allows the actors to be the focus of the four short plays rather than elaborate furnishings or wall décor. The same can be said for the simplistic yet period appropriate costumes designed by Suzanne Pratt. Keeping the women looking proper or of their financial station without drawing too much attention to patterns, styles, or accessories, Pratt fortifies the notion that the characters created by the actors are more important than the accoutrements with which they are adorned.

Director Howard Berkowitz keeps the works of Chekhov moving like clockwork, progressing naturally and succinctly from one to the next without pause or preamble. The pacing is set in such a manner that the overall performance has a fluidity to it, keeping the audience engaged and involved without feeling bereft that each individual show is quite short. Berkowitz works hints of the Russian accent into certain scenes, not wanting it to overwhelm or detract from the emotional and comic outbursts delivered by the characters.

The Dangers of Tobacco

As a solo monologue addressed to the audience under the guise of a lecture, Nyukhin (Mike Zemarel) delves into the darkness that is his warped and frustrated existence thanks to his overbearing wife. Zemarel creates a pitiable character who starts off with a slightly nervous disposition and devolves into a complete basket case by the end of the play. His comical timing is impeccable and the constant fidgeting, whether physically present in his body or manifesting itself in his voice, furthers the development of the erratic character. Zemarel has a keen grip on the rambling meanderings of his anecdotes, letting the nerves of his character radiate through them as well. A wholly impressive performance that engages the audience for its duration and works as an effective opener to the show; Zemarel provides a clearly conceptualized and thoughtfully developed character for this play.

The shrieking in this one-act is unbearable at times because of its shrill pitch and intense volume, but this sketch is by far the funniest of the four. Lomov (Ishai Barnoy) plays a dreadfully nervous lad with a woefully paranoid complex that carries through his physicality and out into his speech. Cherie Weinert as the obstinate and mulish mother is a comic hoot, and that’s a fact! Rounding out the trio is Laura Malkus as the young love interest Natasha. There are outbursts of indignation from Weinert that will make your toes curl while the biting banter between Barnoy and Malkus will keep you gasping for breath between bouts of laughter. All three performers give exceptionally well versed renditions of these heightened and overdramatic characters; playing them to the top of their existences with theatrically heightened hysterics. And all the rest of it is a maniacal roller coaster of shouting, screaming, hilarity well suited for truly exposing the humor in Chekhov’s work. Bring your earplugs and laugh away!

While Alisa Padon plays a mostly silent character it is her responses to Ishai Barnoy (as the spastic Tolkachov) that are well worth watching. Barnoy develops a vividly animated character that borders on the edge of lunacy. Using every inch of his body to articulate the stresses of a summer in the country, his limbs become an extension of his vocal exasperation. Watching Barnoy’s constant motion and listening to the continuing increase in his frantic speech is exhausting in the most comic fashion possible. Barnoy even makes monotony sound treacherously fatiguing as he rolls through a segment of his monologue about the humdrum routine in the country without pausing to draw breath. Watching Barnoy’s portrayal of a man at the very last filament of his very frayed and frazzled rope is a good deal more humorous than it ought to be. Keeping pace with Barnoy’s character will be quite the task but it comes with a healthy dose of humor in the process.

Concluding the quartet of Chekhovian works is a three-person melodrama that rings familiar with a mild soap opera. Valerie Dowdle as the ‘seen but not often heard’ servant produces a glorious French accent that soothes the emotional wounds of her mistress Popova (Zarah Rautell). Intruding her prolonged period of mourning is Smirnov (Zemarel) and the sparks fly from there. Rautell delivers an engaging performance with a fiery flare that really sets the scene ablaze with conflict. Zemarel falters ever so slightly in his portrayal of the man, hopping back and forth between desperate and angry, never fully delving into either emotion. But the pair have a beautiful chemistry; at first volatile and unstable melding into something heated and furiously passionate. Rautell carries the scene and allows the audience to have fun with the subtler jokes built into the work, particularly when attempting to cock the gun. A perfect cap to the overall show, The Bear brings more of the sexual humor of Chekhov’s writing into play here, expertly delivered by these two sassy females. 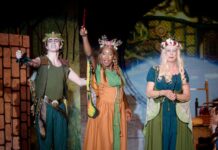 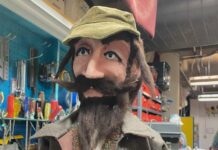 The Puppet Co. tells a sweet and deep tale in ‘Hershel and the Hanukkah Goblins’