In Washington, D.C., there is probably no more sensitive and emotionally laden topic than gentrification.

So it is refreshingly relevant that the new company Nameless chose to premiere the first show in its “Happy Hour Theatre” series, Last Call, which directly confronts gentrification in D.C., in a club in the heart of Adams Morgan. Heaven and Hell, located on 18th Street NW, is smack dab in the middle of a part of the city where gentrification is on the tip of everyone’s tongue. After all, Adams Morgan was one of the first epicenters of the Great Neighborhood Redevelopment of Washington, D.C. Since joined by Columbia Heights, H Street Northeast, Petworth, Navy Yard and so many other neighborhoods, Adams Morgan is practically a monument to what comprehensive and large-scale redevelopment looks like.

This is critical to the core of Last Call, because although the subject of gentrification has been explored before on D.C. stages (see Bruce Norris’ groundbreaking Clybourne Park) Nameless asks the audience to go a step further in actually travelling to a gentrified neighborhood to see the show. In a way, Director Nia M. Barge has made the entire neighborhood the setting of Last Call. The play itself, written by A’Leighsha C. Butler, is staged in one half of Heaven and Hell’s upper level (Heaven, presumably…) using an actual bar and a few tables and chairs as its set. This too is pertinent because the play takes place – where else? – in a bar in a rapidly changing neighborhood in Washington, D.C.

The fictional bar is called “Mike’s Place,” a staple of “the neighborhood” (meant, of course, to stand in for any of the numerous gentrified D.C. neighborhoods), run by Mike (Adiyb Muhammad). His restaurant has adapted in recent years, however, due to pressure from the influx of younger, wealthier, and whiter residents. Folks like Molly (Katherine Jessup), a sarcastic yoga instructor who wears the mandatory thick-rimmed glasses, and Tod (Darren Rabinowitz) and Todd (Donta Hensley), a well-educated gay couple, have convinced Mike to make certain changes to the bar, like replacing his father’s traditional fried fish sandwich with a hummus platter. Even Mike’s daughter, Jocelyn (Alexis Graves), who grew up in the neighborhood, is sympathetic to the redevelopment happening around her. But when Jordan (Dominique Antonio Spenser), a troublemaking young man who grew up with Jocelyn but only recently returned to D.C. arrives as Mike’s new employee, he objects to the changes he sees in both the neighborhood and his once-girlfriend, Jocelyn. It is clear Jordan and Jocelyn have their own personal baggage, and the chemistry between Ms. Graves and Mr. Spenser crackles from the start. Their Sam-and-Diane relationship parallels the larger story about neighborhood redevelopment. Just as Joceyln has changed, so has the neighborhood, and Jordan (like so many of the original residents) feels confused, resentful, and left behind.

If Jordan represents the disaffected neighborhood Old Guard, then the aggressive agents of change are epitomized by Jenna (Samantha Sheahan), a blaringly Caucasian new resident who storms into the bar, demanding answers about the whereabouts of her lost Chihuahua, Petunia. In short order she accuses “homeboy” Jordan of kidnapping her beloved pet, and strong-arms Mike into holding a mock trial right there in the bar, with Jordan as the indignant defendant.

But of course, it is not just Jordan who is on trial here. It is the whole huge subject of Who Owns The Neighborhood that is really at stake. As the farce of who stole Petunia unfolds, the real drama is between the old residents and the new. Dottie (Sierra Edwards) is the former Advisory Neighborhood Commission chair, ousted by Jenna in the previous election. As Jenna agitates for butterfly gardens and Whole Foods in the neighborhood, Dottie reminds her about what is lost in “redevelopment”. The so-called “empty spaces” where neighborhood residents would hang out, play chess, and get to know each other are now expensive condos and frozen yogurt shops. People like Dottie, Mike and Ms. V. (Tia Dae) are outraged that their community seems to be being invaded by people who see their neighborhood as an eyesore that needs to be torn down and renovated.

To her credit, Ms. Butler did not write Last Call as a one-sided polemic against gentrification. Jenna, Molly, and the gay Tod(d)s may be outsized caricatures of The New D.C., but they do fight back against the accusations that they are insensitive invaders. During one particularly powerful moment, Todd, who is black, eviscerates Jordan for telling him that this is not his home. Todd fires back that as a gay man, he can’t go home to West Virginia, and that this neighborhood, where he and his fiancée are building a life, is their home. Todd and Tod are not usurpers or colonialists; they are residents, and just because they are new and have a penchant for organic food and a beefed up police presence doesn’t make them evil or racist.

The layers of complexity surrounding gentrification, and the heavy emotional baggage that goes with it, is told elegantly and with great humor by Ms. Butler and Ms. Barge. I was impressed again and again by how these deeply serious issues were woven invisibly into a story that moved quickly and with razor-sharp comedy.

The entire ten person ensemble did an exemplary job of communicating both the comedy and the drama of Last Call, and they deftly avoided the trap of becoming caricatures. I was watching real people on stage, and it was this authenticity that made the show so funny and so touching. I must single out Ms. Dae (Ms. V.) and Ms. Edwards (Dottie) for their particularly endearing and hilarious performances.

I also commend the director, Ms. Barge, for her smart and creative staging choices. Although most of the action occurred on the L-shaped “stage” in front of the audience, the actors walked amongst the audience when it suited them, and often broke the fourth wall. In effect, the audience became a part of the show, and this effect was even sharper given the site-specific nature of the performance. 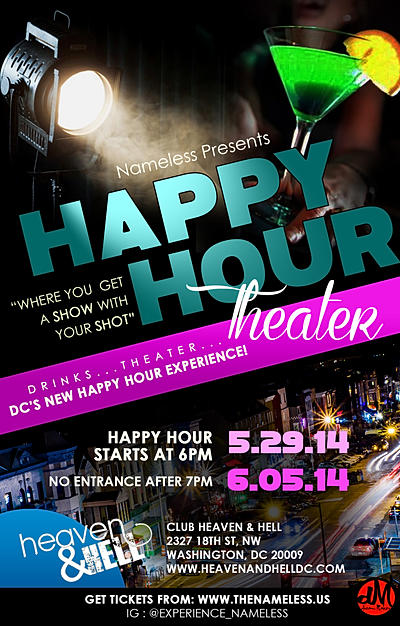 I must say, as a new resident of D.C. who enjoys Fro-Yo and Whole Foods, there were some uncomfortable moments of white guilt for this reporter. But, strange as it sounds, I enjoyed those self-conscious moments as much as any other in the show. At one point in the show, an “Old Resident” (James Wingfield) emerges from his covert position in the audience to launch a diatribe against gentrification. As the rest of the cast looks on in shock, Mr. Wingfield repeats again and again, “No spaces… no places” before he is escorted out of the theatre by the director herself. This bit of Brechtian staging was inspiring, depressing, and provocative all at once. Theatre should make people uncomfortable; it should make them think. I commend Nameless Theatre Company for presenting a show that is innovative, in-your-face, and funny as hell. Residents of neighborhoods all over D.C., old and new, need to hear the story that Nia Barge and A’Leighsha Butler is telling. Maybe then we can learn to get along a little bit better.

Running Time: It runs 90 minutes, with one 15-minute intermission.

Last Call has its second and final performance on June 5, 2014 at Heaven and Hell -2327 18th Street NW, in Washington, DC. For tickets, purchase them online.