The DC Black Theatre Festival, which runs through June 26, this year offers some 45 self-produced shows, most one time only. Organized annually by the DC Drama Department, a nonprofit educational theater company, the festival features performances in four categories: drama, deaf artists, family, and inspirational. I’ll be sampling, and reporting on, a few—but to fully appreciate the festival’s unique range of programming, go to the complete schedule online. 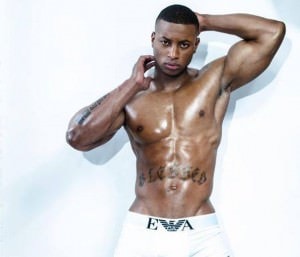 Onstage at the ARC Theater was a table and chair. The Tyson character (played impressively by Tavarius Graves) enters wearing just boots, a backward baseball cap, and a towel wrapped around his waist. We learn later he’s on a break from a porn shoot he’s in. He sits, vapes (as if it’s a blunt), and begins talking to an unseen interviewer, whose probing questions steadily prompt him to bare all. Though he gets naked only figuratively, there’s an interlude early on when Graves demonstrates how the adolescent Jonelle danced at a gay club: slow and undulating and fine. The scene went on far longer than needed to make its point, but Hardy, who also directed, accurately judged that this late-night audience would not be impatient for it to end.

On the outside Graves is muscularly built, more buff than the real-life Tyson, and he brings to the role an extraordinary interior emotional range—from brazen and boastful proclamations of his character’s propulsive sex drive (“I like to fuck” is the gist), to an anguished and wrenching  portrayal of a suicide attempt when Jonelle was a youth. Graves plays that particular scene, which comes in the middle, with penetrating depth. Jonelle is sent to Covenant House, a refuge in New York City for “runaways and throwaways.” Alone in his room, despondent and depressed, he holds a razor blade up in his right hand and tells us his left wrist is calling for it. The suspense in the moment is intense. Suddenly there is a pounding at the door and Jonelle is interrupted by a priest, a white man from whom the boy had had creepy sexual attention and who now inadvertently saves the boy’s life. 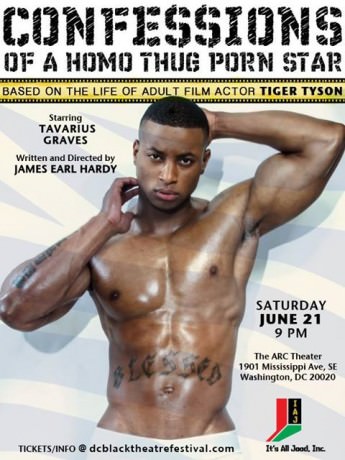 Jonelle is sent to a mental institution and he cannot bear being there. Graves handles deftly the other characters in the story, such as the unctuous priest, and here he voices “the psych guy,” who tells him exactly how he needs to present himself in order to get out. Jonelle smartly obliges. And he remembers something he learned from another resident at “CH”: that he could make good money dancing and stripping at a club with a gay clientele. So that is what he does. Then, largely endowed, he is discovered while stripping by a producer, and his career in gay porn takes off.

Tyson’s titillating upward trajectory—hardly what Horatio Alger had in mind—stands in stark contrast to the too common tragic alternatives for other urban youth in his circumstances: to be jailed or killed. Moreover the very sexually active Tyson—having himself avoided the other tragedy so many brothers have not—is in real life a vocal proponent of condom use and vehemently denounces bare-backing.