There’s something special that happens when you bring together four supremely talented men on a single stage, couple them with one of the nation’s finest orchestras and conductors, and arm them with the songbook from one of the greatest eras in Rock ‘n’ Roll history. Add to that a Tony Award-winning Broadway musical, some infectious choreography, and star chemistry—and you have a surefire recipe for a heck of a good time. 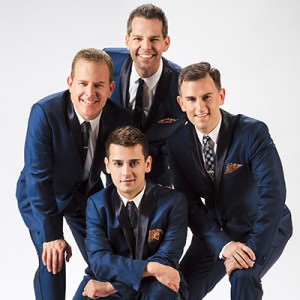 The story goes a bit like this: four talented individuals with four distinctive sounds come together for the original Broadway production of Jersey Boys. Over a thousand performances later, these four natural performers realize that their love of the music that defined the 196’s transcends the show that they were performing eight times a week and begin practicing in their dressing rooms at intermission; they started with songs that they each loved—classics like “Big Girls Don’t Cry” and “Sherry.” Forming a “musical brotherhood,” these four stars—collectively known as The Midtown Men—reunite for a one-of-a-kind concert experience at The John F. Kennedy Center for the Performing Arts’ Concert Hall—showcasing their trademark sounds, choreography, and chemistry that took the musical theater world by storm.

“Authenticity is the core of this musical brotherhood,” says the New York Daily News. “The Midtown Men sound as crisp as their Rat Pack–inspired suits!” The group—sharply dressed in fitted Hugo Boss suits looking as sharp as the red-velvet suits from The Four Seasons—performed hits from The Beatles, The Drifters, and The Four Seasons, plus Motown favorites and more—putting a Jersey Boys twist on some of the most iconic songs of the 196os.

Christian Hoff dazzled with his performance of “Up On The Roof.” Hoff won a Tony Award for his performance as Tommy DeVito in  Jersey Boys, as well as Drama Desk Award, Drama League Award, and Outer Critics Circle Award nominations, and his level of expertise and stage presence is something that can only be achieved through years of experience.

Michael Longoria was one of the audience’s clear favorites of the evening for his tenor vocals that echo Frankie Valli.  Best known for his star turn on Broadway as Frankie Valli in the Tony Award Winning musical Jersey Boys and perhaps for his Broadway debut in the Hairspray, the young and bright-eyed Longoria transported audiences back to the heyday of the Rock ‘n’ Roll era song after song, performing the show-opener “Making My Way Back To You Babe” and “Can’t Take My Eyes Off Of You”—delivering both with a degree of borderline punk-attitude that seemed reminiscent of how Frankie Valli might have been in the 1960’s. He shined in the Motown Medley in the second act, singing “I Want You Back” from The Jackson 5. I’m excited to see what becomes of Longoria in the coming years as I have a hunch he is destined for stardom.

Daniel Reichard, best known for his portrayal of chief songwriter and original Four Seasons member Bob Gaudio in Jersey Boys (a role he originated both on Broadway and in the La Jolla Playhouse premiere), similarly dazzled with the show stopping number “Cry for Me” from Jersey Boys. Getting down on his knees in the emotional arc of the song, he brought audience members to their feet as he belted the final notes: “Just the way I cried for you / So go on and cry, cry for me.”

Tony Award nominee J. Robert Spencer—known for originating the role of Nick Massi in the Tony and Grammy Award-winning musical Jersey Boys and originating the role of Dan Goodman in the critically acclaimed Broadway production of Next To Normal­—sang my favorite song of the evening, “California Dreaming” with a high vibrato that gave me goosebumps. His voice is so crisp and so clean that, even through the rich sound of the full orchestra, resonated purely and easily throughout the halls of the Kennedy Center.

Smooth harmonies might be the greatest understatement ever. The songs where the group truly shined were the group numbers in which you can hear how the four unique and distinguishable sounds combine to form the mellifluous harmony of the entire group, in pieces like “Ain’t No Mountain High Enough, “Sherry,” and, of course, “Oh, What a Night (December, 1963).” The group together brought a refreshing, vibrant take on some of the most classic songs in the repertoire of the legendary Four Seasons—among many other iconic artists—with their rousing performance on Friday evening.

Accompanied by the National Symphony Orchestra (NSO) Pops conducted by Steven Reineke, their melodies were perfectly accompanied by a full orchestra and band that kept the audience tapping their toes and clapping all night long. The two numbers that the NSO Pops performed alone were enjoyable pieces as well. Opening with “On Broadway,” which was, in my opinion, the perfect opening number, and beginning the second act with a medley of favorites by The Beatles, the NSO Pops set the right tone for their blockbuster season finale. 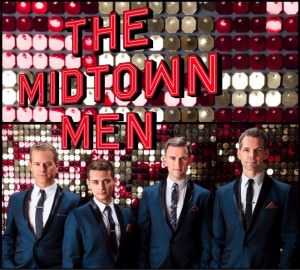