It’s taking me a moment to get your DC-CV straight.

A Hill intern. An unemployed Georgetown law grad. A returned Peace Corps volunteer. And a Rhodes Scholar. Together they live in a shared house in a transition neighborhood and each day take on the madness of Washington DC, trying to start their careers, find love and navigate the warped reality of the DC-CV driven rat-race. We discover that, though these young Washingtonians are full of good intentions, they live in the world of the iPhone. This means they’ve never really talked to each other, let alone their neighbors or the security guards who protect DC. 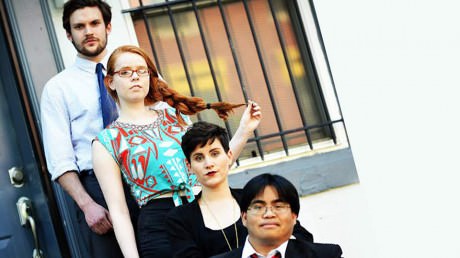 DISTRICTLAND captures one particular day in which collectively these housemates encounter DC archetypes we know all too well: a sexually-frustrated Congressman, an Indian IMF economist, an ennui-filled French World Banker, an Afghani cabbie, a LGBT slam poet, an ambitious McKinsey consultant who has started a young leadership organization that has an acronym for a name, a Random Sleepover Girl readily responding to OkCupid/Tinder solicitations, an animal rights Lobbyist and the lone DC native who laments the gentrification of the District, particularly U St., where her grandfather’s name is on the African-American memorial.

It looks familiar because it’s all true. Cristina Bejan wrote DISTRICTLAND based on 100% true stories in 2011 at the request of two local filmmakers who wanted a satirical script about DC. Romanian-American, Bejan felt that DC actually reminded her of the absurdity celebrated by playwrights she knows from her own cultural upbringing: Eugene Ionesco and Ion Caragiale. DISTRICTLAND is a satire yes, but an affectionate one. It’s a plea for all of us to slow down, open a bottle of wine and talk to each other. Spoiler alert: you are not your LinkedIn profile!