Grab your hat and join the fun as pirates, circus entertainers, a few cops and robbers, and the world’s most popular whippersnapper come to life this summer in the City of Fairfax Theatre Company (CFTC) and Truro Anglican Church’s rollicking and whimsical Pippi Longstocking: The Family Musical, running July 18-19 and July 25-26, 2014 at Lanier Middle School.

CFTC Creative Director Kirsten Boyd, who is musical director for Pippi Longstocking, said, “The show is full of life, color and excitement. It’s such a quirky and funny piece – it’s been great to see adults, teens, and children in the cast enjoying themselves.”

More than 130 adults and children auditioned for the coveted roles in Pippi Longstocking, Boyd said, necessitating two casts. Pippi Longstocking: The Family Musical brings the legendary whippersnapper to life this summer in at Lanier Middle School on July 18-19 (Pirate Cast) and 25-26 (Circus Cast) (see below for full cast lists).

“All the characters in Pippi are like cartoons – larger than life, bright and energetic,” Boyd said. “There’s lots of moments for each actor, whether they are a lead or in the ensemble.”

Boyd said she is very excited about working with the artistic team for Pippi Longstocking: The Musical.  “Matt Lanoue-Chapman is an experienced director and has already brought a pirate-ship full of creative ideas,” she said. “Our choreographer, Erik Sampson, is a professional modern ballet dancer, so his creative moment expertise will really help us pull off the circus. The music for the show is fun, and in a great range for most ages and voice types in this style of singing.”

Every child dreams of living alone in their own house, and Pippi Longstocking actually does – along with her horse and pet monkey! In her adventures with her new friends Tommy and Annika, she encounters pirates, circus performers, cops and robbers and her annoying teacher!!

Maggie Slivka, a rising fifth grader at Bull Run Elementary, plays Pippi in the Circus Cast July 25-26. Slivka, who recently played Young Eponine in Reston Community Players’ Les Miserables, said she identifies with many of her character’s traits. “Pippi is sort of like me – she’s very outgoing and outspoken,” said Slivka. “I start sometimes to tell stories and they run away with me. That’s exactly the same. I think the toughest part about playing Pippi is memorizing my lines.”

“I’ve really enjoyed getting to know this cast; they are a great bunch of people and I hope I can do other shows with them,” said Slivka. “I think audiences are really going to love all the acrobatics in the Circus scene.”

Sierra Hoffman, a sophomore at Fairfax High School, plays the kleptomaniac tea guest, a student, a stilt walker, and a featured dancer in both casts of Pippi Longstocking. Hoffman, a veteran of 20 shows since she was seven, appeared as Bonnie Boylan in CFTC’s Annie and was most recently seen in the ensemble of Fairfax High School’s Cappie nominated 9 to 5.

“I love playing the kleptomaniac mostly because I love playing comic relief roles, especially ones not written into the script,” Hoffman said. “The hardest part of playing a kleptomaniac was definitely coming up with bold character choices that suited the vision of the director, choreographer, and music director to create perfect harmony in the scene.”

Hoffman has been performing with CFTC since fifth grade in Annie Get Your Gun. “I then went on to CFTC Youth Ensemble and continued from there,” she said. “Over the years I’ve made lots of great friends, which is a major part of what I look forward to each summer.”

“I think the audiences will love Pippi because of how quirky and fun each character is, in a new way that you can’t find in any other community theatre show,” Hoffman said. “It’s fresh, never been done before, and sure to have everyone laughing.”

“There is literally something for everyone in this show,” said Hoffman. “We have a circus scene, nonsense songs, cops and robbers, and ballads, all of which will be stuck in your head all the next day, guaranteed.”

Kaia Griggs, a fifth grader at Wolftrap Elementary School, plays Miss Carmencita in both casts of Pippi Longstocking. “I like that I am in the circus, and I get to be a snobby diva, which is going to be really great!” said Griggs. “I also get to do some of my rhythmic gymnastics tricks in the circus, like tumbling. The hardest part is pretending that I don’t like Pippi in the play, because in real life I do like her, so it is kind of hard to tell her that she is bad and is ruining everything.”

Griggs said she originally auditioned for the musical because she had enjoyed CFTC’s drama classes, plus she was a huge fan of the Pippi Longstocking book. “People should come see the show because it is entertaining, and Pippi is such a lovable character to watch, and the whole plot is amazing,” Griggs said. “My character is a circus diva, so watch out!”

Siri Pellot, a freshman at Fairfax High School, plays Thunder Karlson in the Pirate Cast July 18-19. “I really have to be spontaneous, and exaggerate my lines and movements,” Pellot said. “Thunder Karlson is the type of character that makes kids laugh.”

Jenny Abrahamson, a sophomore at Fairfax High School, plays Thunder Karlson in the Circus Cast July 25-26. Abrahamson is a nine show veteran with CFTC, having previously performed in such shows as Annie and Into the Woods. “I started with CFTC a long time ago,” she said. “My mother actually forced me to go to their very first summer drama camp where I had loads of fun and made great friends.”

Abrahamson said, “What I like most is that in the script Thunder Karlson is a guy, and making that change from script to stage is really fun, but also requires a lot of thought. I think the audience will have lots of fun with Pippi, especially the audience participation.”

Sisters Kaylee and Sienna Williams share the stage both weekends as ensemble members in Pippi Longstocking. Kaylee Williams, a third grader at Providence Elementary School, plays a lion in the circus. “This is my first play with City of Fairfax Theatre Company,” Kaylee said. “I think audiences will like the circus scenes.” Sienna Williams, a sixth grader at Mosby Woods Elementary School, plays a circus acrobat. “I think audiences will enjoy the humor and the songs and choreography,” Sienna said. “We’ve been working hard, it’s a fun and energetic show and very funny.”

Lizzie Bayer, a sixth grader at Poplar Tree Elementary, is excited to be playing the Horse both weekends in her very first play after taking an acting class with CFTC. “It’s fun getting to be in a costume with another person, but it’s hard not to laugh when we make the horse noises,” Bayer said.

Janice Guo, a sixth grader at Greenbriar West Elementary School, is in the Pippi Longstocking ensemble both weekends. “This is my first play and I like to swim when I’m not on stage or reading,” Guo said. “The most challenging part is getting all the movement right, memorizing the lyrics to the songs, and reacting to other characters in the different scenes.”

Katie Lim, a rising sixth grader at St. Leo the Great School, is thrilled to be making her sixth appearance with CFTC as an ensemble member, tea guest, and Siamese twin ringmaster in Pippi Longstocking. Last summer, Katie was featured as Duffy in CTFC’s production of Annie. In 2012, she was featured as Princess Ying in The King and I at Wolf Trap. “I think Pippi Longstocking is the funniest show I have ever been cast in,” Lim said. “Anyone who loves to laugh should see this show!”

“I play a lot of roles in Pippi Longstocking,” Lim said. “I like playing the Siamese twin ringmaster the best. The Siamese twin ringmaster role is challenging because you are stuck to your twin and have to move along with them. You also have to speak with a foreign accent that is challenging, but fun. I also enjoy playing the fourth tea guest who shocks the well-mannered ladies because she’s such an uncivilized slob!”

The iconic literary character, Pippi Longstocking, has enchanted generations of children. In this adaptation by the popular Danish musician, Sebastian, she hits the stage as a high spirited, warm hearted incarnation of every child’s dream of freedom and power.

CFTC Musical Director Boyd said, “The show features a circus – and we’re working hard to create the circus atmosphere from the moment people walk in the door! Circus performers, cotton candy, popcorn and face painting will all be available before the show and during intermission. It will be great fun for people of all ages!” 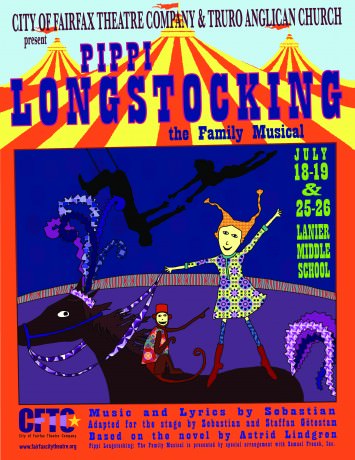 Online tickets are $10 for adults 13+ and $5 for children under 13. may be purchased here. Online ticket sales close at noon on the day of the performance.

Tickets will also be available at the door, and prices are $15 for adults 13+ and $10 for children under 13. More information is here.