This Gonna Be on the Test, Miss? is a solo show that has been 20 years in the making.

Twenty years ago I detoured from acting into academia. I became so frustrated trying to explain what I teach (Remedial English is for dummies, right?) and more particularly whom I teach (What do you mean your students don’t do the work or buy the book, or, they sleep in class?), and bumping against our cultural narrative, characterized by a Hollywood portrayal of the clichéd ghetto high school student. I figured the best way to explain myself would be through the powerful medium of storytelling, more specifically the solo show. 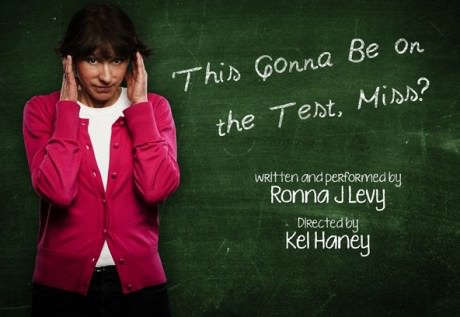 This Gonna Be on the Test, Miss? is based on the true stories from my 20 years teaching Remedial English in community college classrooms both in Los Angeles and New York City. I present classroom situations and characterizations of the academically underprepared and socio-economically disadvantaged students who are often misunderstood, represented by statistics, and portrayed as clichéd ghetto caricatures.

My students have always inspired me to tell their stories, their follies, their successes. But on a deeper level, the issues surrounding education and class and economics have compelled me to give a voice to this adult student population that is virtually voiceless, to make visible an academic environment that is virtually invisible. I have to tell this story, not the Hollywood story of the clichéd ghetto students, not the story behind sensational headlines: NCLB, standard tests, and teacher evaluations, but the story of real students, real lives.

As I was writing this show, I recognized this was also a self-portrait of my transformation. I was just another LA actress who happened to take a part time teaching position, as I waited to land that life-changing acting gig. But as my first semester teaching remedial English in a downtown Los Angeles community college progressed, my students, who were hungry to learn and move ahead in their lives despite their complex and chaotic existences, were profoundly changing me. Hey, I was going to act in movies, TV shows, and plays. Little did I know that I had, indeed, landed that life-changing gig.

Did you know: According to the Higher Education Policy Making and Analysis, nationwide, 53% of students in two year colleges drop out after their first year. Did you know: 60-70% of those who begin in a class like mine never earn a postsecondary degree or credential or transfer to a four-year institution. Now is the time to tell this story. The story of higher education you don’t know; the story you need to know.

Merging my passions for performing, writing, and teaching, I offer a candid glimpse into the urban community college. Desiring to do more than casually blog or craft serious scholarship about my experiences, my students’ stories, and higher education, I have returned to my roots and the power of theater to share an experience that provokes thought, conversation, and action.