Mandarin Orange is written and performed by Kate Robards.

Uprooted from country life in Orange, Texas, Kate finds herself at the center of Shanghai, China’s largest city. Now, with humor and wit, she shares her struggles and stories of culture shock in her autobiographical solo show Mandarin Orange, a globalized comedy about identity and home. 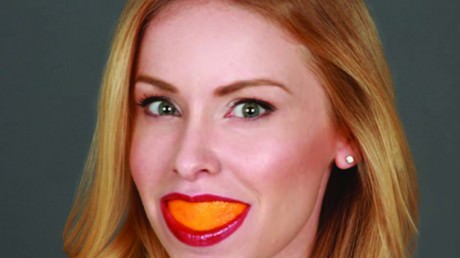 Hunter: Set the scene for us.

Kate: I was born in Texas, on the border of Louisiana. It’s Cajun cowboy culture down there. At the beginning of the show I’m immersed in the history of the town of Orange and the history of my family. The two histories intertwine, since I’m the seventh generation born in Orange, and I can trace my ancestors back to the original settlers. No cousins marrying cousins, though — my mother prides herself on the fact that the family tree branches out, not in!

But then I begin to realize how different the rest of the world is from this small universe.

Then we flash forward, and you’ve ended up in the bright lights of Shanghai. What happens next?

At first I’m overwhelmed by the new culture. But the thriving city has some familiar sights. It seems like there’s a Starbucks on every corner. I find Super Wal-Mart, McDonald’s, Burger King, Dairy Queen, IKEA, and other chain stores that can be found in any big city around the world. I also join up with a group of American expatriates that call themselves ‘The Shanghai Dolls,’ and I discover a world of globe-trotting women that travel to other countries but still yearn for the comforts of America.

Then I get a job at an advertising agency, which is when I finally start to meet Chinese citizens and learn about their lives and traditions.

Does the show return to Texas at any point?

Yes, within the Shanghai scenes, the play flashes back to Orange, where my mother has a local radio show and updates the small town on local news. So the story careens wildly between these two worlds. And then after a year in China, I return to America, and to Orange, with a whole new perspective on my childhood home.

What inspired you to create a show out of your experience?

I’ve been writing and performing since I was a kid, but I didn’t think of telling my own stories in a solo-show format until I saw Lauren Weedman perform her one-woman show Bust at The Studio Theatre in 2011. I was working there as a communiations apprentice at the time, and I saw the show twice. It set off this light bulb for me. Right away I saw it as a way to combine my interests in writing, performing, and telling stories about myself and about the characters I’ve met on my journeys. I’m hoping to find the perfect combination of the serious and the comic.