(Best of the Fringe!)

In his play Interrogation, John Feffer, a foreign policy analyst who writes widely on privacy issues, pokes gentle fun at U.S. intelligence agencies as if to say, “I love my country but I fear my government.” 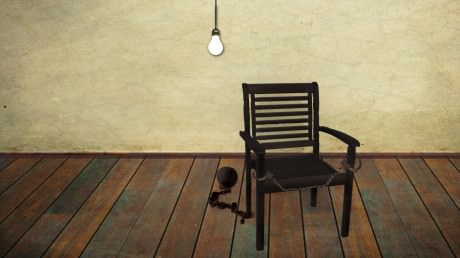 Directed by Matty Griffiths, Feffer assumes the role of John Miller, a contract interrogator who worked in Iraq but is now plying his trade stateside. He tells us three stories, the implications of which creep upon the consciousness so insidiously that the play turns out to be a huge civic wake-up call.

The first story is about a free brunch targeted by law enforcement officials to a select group of people. “Within the past year you did something of interest to me and to my employer. We are even more interested in what you are planning to do,” Miller says.

The second story is about how he met his girlfriend, Samantha, who is played convincingly on screen by Elizabeth Richards Bailey. When he first sees her, she is on a date. But wait until you hear how he broke them up. “Oh, you thought it was read-only?” he asks, in reference to his clearance to access people’s personal information.

The third story is such a doozie that they have to hand out the programs after the show so as not to give it away, but it won’t spoil it to say that actor Michael Crowley plays an entertaining role.

Creative projections by Kip Voytek added nicely to the plot, and spotlights by Katie Golden and lighting by Marianne Meadows were right on target.

Two audience members who got pulled into the show by raffle on opening night and almost stole it. Asked if she’d rather have a one-on-one conversation with President Obama or $1 million, one opted for the money but added she would have picked the conversation a few years ago when she was more optimistic. The other, a dapper older Russian man, paused so quizzically before answering whether he planted a bomb that he could have been straight out of Dostoevsky’s Crime and Punishment. Future raffle winners are cautioned to watch out for the envelopes: the adhesive might be bugged. Even DC Fringe may be complicit.

Interrogation is a deftly told dark comedy about a serious and timely subject that immerses the audience completely in its creative story.

Running  time: 90 minutes with no intermission.

Interrogation plays through July 26, 2014, at The Mountain – at Mount Vernon United Methodist Church – 900 Massachusetts Ave NW, in Washington, DC. For performance information and to purchase tickets, go to their Capital Fringe Page.

LINK
A preview on DCMetroTheaterArts.