Sparse but beautiful, Silver Finch Art Collective’s a fire in water is a modern opera with an ancient theme – the impact of war particularly on loved ones, lost or left behind. It’s symbiotically set against the myth of Achilles and the legendary history of Alexander the Great. Those lost are both men’s lovers, Patroclus, paramour of Achilles and Alexander’s Hephastian. More central to the story though are those left behind: Thetis, mother of Achilles, and Artemis, the goddess of childbirth and protector of Alexander the Great. 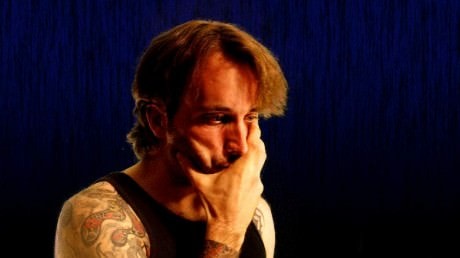 Normally when I think of opera I think over the top opulence bordering on gaudiness going on for a bit too long. The Silver Finches steered clear of this and made simple but strong choices which keep the production clean and really make it work. The set is a cyclorama that has a map of the stars preshow, then changes from blue to red to green and back again as the show progresses and mood dictates. A few chairs and two pedestals make up the rest of the set. The orchestra is comprised of piano, flute, two violas and percussion. Choreography is simple and precise but elegant – a trio of women playing a chorus of stars manifest upon being handed stars by Thetis and Artemis kneeling before them.

Even color is used sparingly, costumes are basic black with the exception of the turquoise gown worn by Thetis and scarlet worn by Artemis. There are clear bowls of water that is ritualistically tinted red, then purple.

That’s not to say “a fire in water” lacks flourish.  Danielle Buonaluto as Artemis and Kristina Reigle as Thetis both have those soaring sopranos you’d expect. Andrew Sauvageau as Achilles provides a dramatic and booming baritone. The score by Michael Oberhauser and Terrance Johns feels slightly unnerving, even in its prettiest moments. The interaction of voices and orchestra is nicely balanced with voices sometimes working against the score, sometimes echoing, sometimes perfectly in harmony and occasionally standing alone.

It’s exciting that companies like Silver Finch Art Collective are using Fringe to bring new takes on classical disciplines to audiences in an affordable fashion.   A Fire in Water plays at the Lang Theatre in the Atlas Performing Arts Center through July 26.  For tickets and information, visit the Capital Fringe Page.

LINK
A preview on DCMetroTheaterArts.