The Small Batch Theater Co. succeeds with modern dance in its unique production of Lucretia Borgia.

Back in Renaissance Italy, Lucretia Borgia was always the baddest girl on the block-or so we’ve been told. Papal daughter and sibling of equally famous schemers, Lucretia stood accused of it all: employing the wiles of a femme fatale and destroyer of men; climbing through serial marriages to nobility, murderess of children–some say even her own twin. 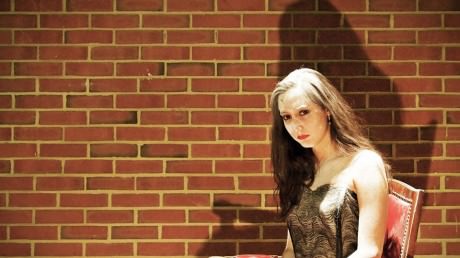 The legends persist and her name in many quarters is still a catch phrase for evil, no matter that actual facts and historical record are thin on the ground.  Admired for beauty, Lucretia B left behind not even a proven likeness. Scrutiny reveals Lucretia Borgia’s licentious image to be mostly a fraud; her multiple marriages arranged behind her back and her own death from childbirth.

As Borgia is now ripe for re-evaluation, along comes the Small Batch Theater Co. of Baltimore, and in its inaugural production uses music, dance and mood, to show the real Lucretia. Not for Small Batch’s three female cast members perform with spirit and aplomb, and under the direction of Leah Englund Brick, they become fripperies or heavy historical drapery. Ms. Brick dresses her nimble cast, who alternate as Lucretia, in modern day clothes and sets.  Her sources for the sympathetic viewpoint are none other than the words of Gertrude Stein, an avant guard writer and 20th century legend (and due for a “Fringe” production in her own right.)

The three actresses who alternate as LB are Elizabeth Scollan, Katharine Ariyan and Sadie Angel Lockhart, recent graduates of Towson University’s Department of  Theatre Arts, and I predict a good future for them all. With credits including musicals and dramas of Ancient Greece to the present day, they bring experience and technique beyond their years. L E Brick builds suspense by introducing her cast in the first scene through silhouette. Their graceful swan-like movements are mesmerizing. When finally glimpsed, their ability in acting primal emotion is startling.

Some of the words of Gertrude Stein frankly went over my head.  (Gertrude Stein had that effect on a lot of people.)  Still, they worked, because they made the character a living and conflicted person, not a classroom lesson.  The dances are part modern dance, part ballet. What’s interesting was to watch how each of the three actresses/dancers brought such entirely different movements when dancing near or around–or on top of–the same red chair. The music was comprised  from several ages, including Jazz, old Rome, and even rock.

The truth of Lucretia Borgia, of wanting to invent herself, rather than advance political designs, makes her a wholly timeless figure. I recommend even a second viewing of this enlightening production.

Running Time: About one hour.