I attended In To The Outside/D.C. al Coda last night with my editor. As you may have heard, one of the actors sustained an injury the night before opening night. 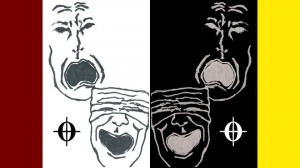 “On Thursday, the night before our opening, one of our two actors broke her kneecap, and injury which left her confined to a wheelchair. Our play relies on two things: wordplay and physical comedy. So adjusting the script, overnight, for someone in a wheelchair was not an option. Instead of simply folding up our tent, it was suggested that our injured actor, Elizabeth Heir, could read her lines from a corner of the stage while I performed all of the action which had been so carefully choreographed. We had less than 24 hours in which to make this change and find someone other than me to run our lights and sound. Life, thus, imitated art: In a play that explores the conflict between independence and interdependence, Elizabeth needed my leg, and I needed her voice. It seemed to fit.”

My editor offered to come back and review the second performance, which we saw last night, and I was asked to review it.

And there were major problems with the show:

The direction. Like a zen proverb we will attempt to describe what isn’t there. The absurdist nature of the script lends itself to an amorphous feel already. That means it is even more important to help the actors create specificity of character (there was none to be had the ENTIRE SHOW). Which leads us to….

The acting. Cassandra Redding begins the show on the floor. And that sums up her performance. She might be on stage for an hour and some, but there is not a single acting choice to be seen (we see lots of “bits.” but no actual acting).

This show attempts to be meta by allowing the actors to comment on the script and the show itself. There is absolutely no differentiation between her character and the character of the actor who comments on the show (and one would think that the two would think very different thoughts about their situation).

Elizabeth Heir (wheelchair bound and pseudo hidden behind the stairs) voiced the other actor, while John Sowalsky, the playwright and director, embodied her voice. This awkward situation is difficult to explain and even more difficult to watch. My assumption (based on John’s performance {and the fact that no acting is mentioned in his bio}) is that John has no training (so he can be forgiven for mugging at the audience so hard I started a neighborhood watch group). His movements were stilted and incomplete and left me wondering what any of his pantomimes were about.

And now to the script itself. Begin with a five minute pantomime and random philosophical musings. Fine. Then show the audience that you think they have the IQ of a box full of hair. You do this by showing them the same gag repeatedly for more than half an hour. You then switch roles and the other actor does the same five minute pantomime you saw at the beginning. Three times (tedious doesn’t even touch it). Finishing with a half an hour of the actors commenting on all the mistakes in the script. Dear God. I just sat through those mistakes. Please don’t assume I missed them. I saw them. All of them. Even those you didn’t mention.

Perhaps if the beginning had been any fun, at all, to watch, discussing the foibles would have been a cute discussion of how much disbelief we are willing to suspend. But, as it stood, this just felt like being assaulted by a Real Housewife of the Abdurdist Theater.

In To The Outside/D.C. al Coda plays through July 26, 2014 at The Shop at Fort Fringe – 607 New York Avenue NW, in Washington, DC. For more information and to purchase tickets, go to their Capital Fringe page.