Classified as a contemporary comedy, this production of Ben & Lucille is hands down the absolute best 45 minutes you will spend at The Capital Fringe Festival in 2014. Playwright Elan Zafir has conjured up theatrical genius that is both modern and relevant and loaded with humorous moments amid a very real dramatic situation. His writing style is captivating; Zafir showcases his true knowledge of how to build layers of plateau steps into the script where escalations gently resolve themselves and just as things approach neutral another moment of conflict erupts between the characters. Nary a dull moment within these 45 minutes, the show moves quickly, its emotional intensity driving it to a stunning conclusion. 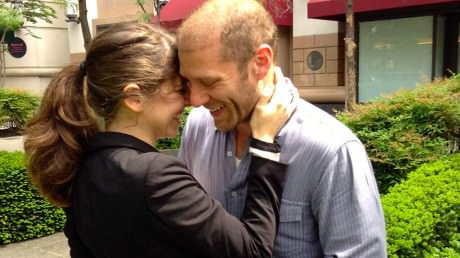 Relationships, in essence, are something that everyone can relate to. No relationship is perfect, everyone quarrels. And it is often the biggest issues that are the least discussed, masquerading as superfluous details. Zafir captures the epitome of these relationship trials and tribulations letting volumes of subtext erupt through what start out as petty arguments until they come to an explosive climax. His writing has a cadence to it that drives the action and the major dramatic question of “will Ben and Lucille survive?” making for a flawless pacing of the performance.

Zafir balances humor into the production; juxtaposing it against heavy moments of serious emotional conflict that often erupt from nowhere— as they often do in real life fights and heated disagreements between couples. His use of language is fluid, saying exactly what needs to be said to articulate both Ben’s point (also acted by Zafir) and Lucille’s (Danielle Peterson) without having too few or too many words. Director Orion D. Jones steps in to really turn up the heat in moments of extreme disagreement, having the characters shouting their lines over one another simultaneously; replicating fights in real life.

The story itself is fresh; not just your average fight between a couple. It’s unique in its essence while being just unattached enough to anything extremely specific so that everyone can relate to it. The characters are realistic, authentic, and genuine. The problems are real, believable, and true; and we’ve all experienced them, even if not at this caliber, at one time or another in our relationships with friends, with lovers, with significant others. Zafir’s writing is the best being showcased at Fringe this season.

Of over 100 shows at the festival this year, it would be inexcusable to miss this brilliance in all its radiant resplendence. Real life, truly captured by a burgeoning and clever playwright who understands dramatic tension, plot construction, character creation and overall how to compose a piece of theatre. It’s an exceptional work not to be missed.