Shakespeare’s Coriolanus has been played, memorably, by some of the greatest actors.  Richard Burton played it; Laurence Olivier played it twice, and here in D.C., Patrick Page starred in a successful modern-dress production at the Shakespeare Theatre Company in 2013.  It has never, to my knowledge; been performed by a woman; it is to Emily Marsh’s credit that she makes a very fine job of it. 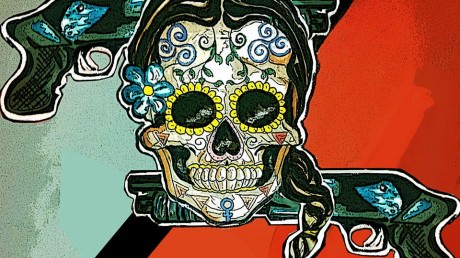 Casting a woman in a man’s role offers an intriguing chance for the audience to contemplate the gendered nature of the character.  Taffety Punk’s Riot Grrrls are celebrated for their all-female Titus Andronicus.  Phyllida Lloyd, the British director, staged a provocative all-female version of Julius Caesar.  All in all, women in Shakespeare have come a long way since the great Sarah Bernhardt,  as the mysterious Dane, received a review by Max Beerbohm with the title “Hamlet, Princess of Denmark”.

Coriolanus has traditionally been viewed as an out-of-touch aristocrat who hates, hates, HATES the plebs.  Set in the early days of the Roman republic, the play presents the supremely talented warrior, Coriolanus, as he struggles to become consul of Rome, in spite of his unattractive snobbery and unfortunate predilection for speaking his mind.  He takes revenge when, having infuriated the populace, he is banished from Rome.  The play is one of Shakespeare’s least ambiguous and most straightforward tragedies, and suffers from the unlikeable character of the central character, despite a powerful storyline and some very fine poetry.  In his movie, Ralph Fiennes solved the problem by turning Coriolanus into a kind of bullyboy/terrorist, who was riveting in spite of his many horrifying deeds.  Here, Elena Velasco has created a visually striking meditation on the very nature of gender itself.  As Volumnia, Coriolanas’ stately mother, Kim Tuvin fascinates as she delivers the most bloodcurdling lines with an air of self-satisfaction, she if she had just won a contest in a suburban bake-off.  It is a unique and very powerful portrayal.

Emily Marsh as Coriolanas gives a first-rate and often moving performance.   Because her Volscian enemy, Aufidius, is played by a man (Robert Schumacher) there is an interesting undertone of sexual tension in the relationship.  She plays the character as a rebellious tomboy, who cannot help being honest and who, having failed to connect with the common people, pays a heavy price for it.

Natasha Gallop (Menenius), has an air of elegance and truth; her devotion to Coriolanas is unwavering, and yet in the end it is still not enough.  Laura O’Brien as Cominius has a commanding presence, and every one of the ensemble—Maddie Kelley (Roman Citizen/Volscian Lieutenant), Angeleaza Anderson (Roman Citizen/Roman Soldier/Volscian, and Tori Clodfelter (Roman Citizen/Roman Soldier/Volscian) is a compelling and versatile performer.  A special note of congratulation is due to Alexis Kent as Young Caius Martius, whose character has a distinctive role in the production.

Robert Schumacher, as the only male in the production, plays Coriolanas’ father, the people’s tribune Sicinius, and Coriolanas’ Volscian nemesis, Aufidius.

As Aufidius he looks rather like Che Guevara and has an air of romance and danger about him.  As Coriolanas’ father he boxes with her, winningly; as Sicinius he is a keen manipulator with his eye on the main chance.  It is quite an accomplishment.  He also did an arresting graphic design for the program.

Elena Velasco’s adaptation streamlines the play (in the original, Coriolanus has a wife and son), which works well with the casting of a woman in the lead.  The choreography, also by Ms. Velasco, is really beautiful, and the costumes (Emily Hunt) are not only appealing but central to the production scheme.   The lighting design (Michael D’Agnostino) and set (Set Consultant is Phil Charlwood) are equally effective and create a world which is haunting and sometimes strangely modern.

Director Velasco, in her Director’s Notes, asks an interesting question.  What of the woman who refuses to remain in cultural, gender based stereotypes? There are many such characters in theatre history, such as Antigone.  Velasco has not given any answers (are there any?) but she poses the question with great integrity and style.