Fully Charged Productions is advertising Size Doesn’t Matter using an alluring, albeit risqué, image on their marketing materials. Audiences  may think that the seven short plays within might be of a humorously sexual nature. This, however, is not so. Featuring playwrights Mario Baldessari, Renee Calarco, Zachary Fernebok, and John Morogiello these seven short “plays” have no unifying theme other than the fact that they are mostly comedic. Directed by Ray Ficca, four of the seven are extremely entertaining. 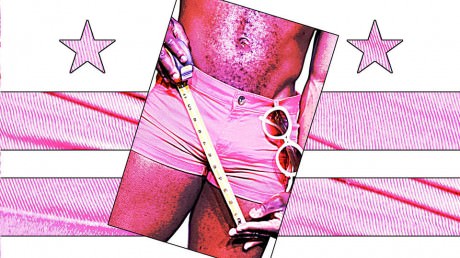 The first ‘play’ within the series is entitled Prologue and it’s written by John Morogiello. It’s the oldest most overused trope in existence of the ‘play being about the play trying to get off the ground.’ The campy satire falls in the middle ground of bad puns and poor execution, which is a shame as there is a good subliminal message of “art and life go hand in hand” tucked away in the messy melodramatics. There is a physical sword fight between the Actor (Joseph Michael Jones) and the Playwright (Cristen Stephansky) to prove which is mightier the pen or the sword. The ending of this little sketch, which highlights how the playwright is destroyed by both Actor and Director (Amanda Haddock Duchemin) is actually quite humorous and if it could have just started there without the expository self-gratification spiel from the playwright character.

The second sketch in the series, called Pounds Aweigh written by Renee Calarco, feels wildly out of place compared to the other six offered within, and has a much heavier gravity than anything else in the production. Because there is no unifying theme to unite these seven stories this one in particular, about struggling with weight loss, feels accidental. The stock character protagonist Calarco inserts has no distinguishing personality or traits to set her apart from any ‘weight loss success’ story, and the dialogue reads like a boring infomercial trying to be way too chipper at 3:00 am. There is a highlight of hilarity toward the end of this sketch featuring Lynn Ritland (who plays the voice of an automated scale.) Ritland’s monotone delivery of her one or two lines is uproarious.

Fashion Speaks…it…but…maybe…nope…give-up…sorry.  Those are about as many words as you get from this sketch written by John Morogiello. The concept is clever. The framework and setting is poorly executed, and the acting is uneven. Setting two women in a high-end dress boutique and having one play the Manager (Jocelyn Chris) and the other the Female Customer (Taylor Robinson) is a mediocre setting and style for the “communication without words” style of work Morogiello is trying to accomplish. They only ever speak words like “yes!” or “you think” and “does it”; incomplete phrases that are specifically vague in an attempt to ever keep anything from actually being discussed. This tactic relies solely on the actors’ vocal intonations and inflections as well as physical gestures, body language, and facial expressions to achieve success. Robinson, playing the customer, does this exceptionally well, having a firm command over her vocal and physical expression, upholding her half of the non-existent conversation. Chris, however, does not, and the idea washes away in her inability to do so.

Because the last four installments are well penned, brilliantly acted, and poignantly humorous with relevant and relatable topics for all. If Ficca and Baldessari— who has penned three of the four final installments— had focused on these four, working to make each one a more thoroughly fleshed out sketch, I predict the show would be a smash hit.

Cattle Call, written by Baldessari, is a hilarious little moment between a potential actress, Priscilla (Amanda Haddock Duchemin) and the guy working the check-in counter at the audition spot, Troy (Joseph Michael Jones.) The saucy repartee that flies between  them is tight, witty, and smacks of harsh reality. Jones creates a fabulously flamboyant character that throws shade with pizzazz all over Duchemin’s character. The comic build-up of counterpoint between them is exciting and well-paced so that when the ending arrives in a surprising turnaround, the humorous payoff is that much more appreciated.

Lemonade Dreams, written by Zachary Fernebok, is the longest of the seven sketches, but barely brushes 20 minutes in length. Fernebok’s concept and overall writing style was intriguing and engaging, leaving a desire to have this piece be more fully fleshed out into a full-length one-act. Focusing on a miserable office worker, Doris (Susan S. Porter) the story winds into this hysterically absurd territory as her Bonsai Tree (Cristen Stephansky) and her Mac (Joseph Michael Jones) begin soliciting advice to her about her miserable life. Stephansky’s character also drips random lists of whimsically fun things here and there. There is a brilliant sense of sense to the nonsense in this performance. Michael Harris, as the Window Washer, steals the scene with his “eeee” sound that he makes to represent his squeegee. Overall a brilliant story, Fernebok should have pushed for his work to be the full-length feature and Ficca could have had one hell of an amazing show on his hands.

Voire Dire Me, another Baldessari installment, is so short it’s a wonder it stands on its own. Despite feeling like it belongs in a segment of a sketch comedy show like SNL, Baldessari’s social commentary on the jury duty process is an uproarious scream. Daniel (Jamal Thomason) and the Judge (Lynn Ritland) go back and forth as Thomason gives every ludicrous excuse in the book to try and escape his civic duty, while Ritland goes about vehemently denying each one. All of five minutes in length, it’s a gut-busting laugher that should have opened the show just before Lemonade Dreams.

The last piece— a one-man monologue also written by Baldessari called Intersections— is another hilariously penned piece of theatre. Acted by Michael Harris, who plays “14th Street NW” the monologue is a well-rounded and thoroughly entertaining look at what it means to be a gentrified city street in the nation’s capital. Filled with local color and identifiable references, Harris delivers it with a Jersey-Brooklyn wandering big-mafia style accent that adds depth and humor to the character. The writing, serving as a subtle socioeconomical satirical commentary on the living and overall existing conditions of the streets of DC, is superb, witty, and poignant. A perfect way to close a sketch show.