At last. A show that has taken the Capital Fringe Festival 2014 theme to heart: Move Me.

Breast in Show, conceived and produced by Eileen Mitchard, is arguably the best titled and best marketed show in this season’s lineup. (Collecting Fringe buttons? Patrons get their own pink Breast in Show button to proudly pin to their chests.) It’s also likely the most aptly named, as it shall prove prophetic when it comes time to clinch the Best of Fringe. 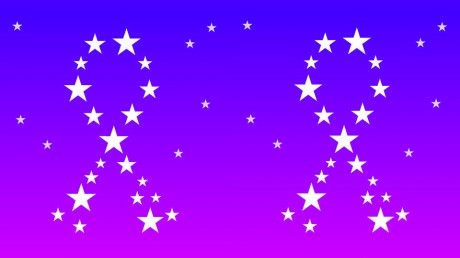 A musical about cancer, you ask? Or as it’s billed: the musical that ‘puts humor in the tumor.’

When the six veteran thespians first hit their marks in various pink-splotched costumes to belt a brassy opener, you gotta wonder: To whom is this targeted? The Pink Ladies gang? Is this some twisted evolution of the candy-stripe crew come to cheer the sick with one-liners about a codified, institutionalized disease?

Granted, many breasts and breast forms had gathered on opening night; possibly 90% of the audience had a vested interest, even if they held things close to their vests.

It takes no time for the drugs to take effect, though. You’re all in as soon as what I’ll dub the “Blah Aria” begins (the program did not include a song list). This is pure-cut medicinal theater, where starkly drawn characters like cards in a deck get tossed at the audience who then must calculate the odds. “Every 69 seconds, someone dies of cancer.” In the race for the cure, there are 2.5 million victors of every stripe. The show speaks for each of them and to those yet undiagnosed, as well as those who love them. Turns out it’s a show for the masses — and not just the metastasized kind.

We appreciate the irony of how a fight for survival interrupts “life.” And discover a new definition for “the 1%.”

Then full onset of the drip, drip, drip. We submit to Director Kathryn Chase Bryer’s well-managed care through some difficult themes. One minute we’re laughing at a scene set in the Chemo Café, where nurse Desiree (Megan Westman) is serving prescription cocktails to patients dancing with IV poles (delightful choreography by Illona Kessell). The next, the audience is wiping eyes in unison and blubbering with nasal drip like a Greek chorus. Or filled with queasy suspense wondering who among them, and us, will beat the odds. Or railing with anger, along with the people onstage we’ve come to love: Wendy (Ayanna Hardy), a tough-as-nails lawyer whose lack of pink in her wardrobe at first belies denial; her husband (Matt Dewberry), who god-love-him is the first to push our visceral buttons; Chelsea (Gracie Jones), a 29-year-old for whom the disease runs in the family; a saucy, seasoned gal (Jennie Lutz) with the hots for her oncologist; the aforementioned dutiful nurse, who is also stricken; and a young father (Chris Rudy), who must endure the taunts of suffering a “lady’s cancer” not only from his buddies but from his daughter’s playground bullies.

All six impeccable actors play multiple roles. Suffice to say, they are top-flight talent ranging from New York stages to major local marquees (Signature Theatre, Olney Theatre Center, KenCen). Pros all, who turn trenchant prose to poetry. It was Maya Angelou who said: “Words mean more than what is set down on paper. It takes the human voice to infuse them with shades of deeper meaning.”

As channeled through Dewberry and Jones especially, playwright Lisa Hayes’ words will slay you. Jones simply works magic. Playing a 29-year-old mother of two who is stricken with breast cancer, Gracie Jones manages to flash all of life’s fragrance before our eyes. And that synesthesia reference (cross-linking of the senses — in this case, sight and smell) is intended. This is an actress whose work is like watching a flower burst open in time-lapse motion. She actually plays multiple roles in Breast in Show — a cancer patient, the wife of a cancer patient and someone who has lost a loved one to cancer. In each case, she recruits every muscle to tell a different story from a fresh perspective.

At the Chemo Cafe, while undergoing chemo treatment and struggling to stay warm under a blanket, Gracie Jones sings a torch song tribute to her nurse, Desiree: ‘A Nurse Named Desiree.” It is the show’s defining moment.

The way Gracie Jones walks, sits, flips her hair or tweaks her tone belies a polished actress who takes time to craft, from flesh and fiber, rich and resonating characters. She juggles a crone’s wisdom with a child’s rawness, because she can play old or young convincingly. Truly a breathtaking performance, and one that will connect with everyone in the audience, as if she’s speaking just to you.

Dewberry, who doubles as Freddy, the proprietor of Freddy’s Prosthetic Emporium, is also immensely gifted, from gut-wrenching drama to burlesque — and if you had any doubts that cancer is natural fodder for musical theater, imagine the joy of the wig and makeup folks whose calling it is to bring out the best in their subjects. So, too, with Freddy’s ebullient makeover dance.

And how refreshing to witness singers whose vocal powers can forgo those Britney Spears-esque lavalier mics. Their singing wells up from within — they sing because they can’t express themselves any other way. What’s beautiful is we get so wrapped up in it, we forget we’re being manipulated. And that, my friends, is theater.

Above all, hats off to composer/lyricist Joan Cushing. Along with Chase Bryer’s direction, I cannot summon enough praise for Cushing’s creations. There is Hardy’s sucker-punch soliloquy, “Pink,” in which she vomits (not literally) vitriol over her circumstance (“I feel shitty” is a great counterpoint to Sondheim’s lyrics in I Feel Pretty); the exploration of relationships in “Toxic People,” led by the sympathetic, kinetic Rudy; Jones’ climactic “A Nurse Named Desiree”; and the melancholic ensemble anthem, “Time.” (I’m improvising on titles.) Let’s put it this way: The percentage of Fringe shows surviving this first round of treatment is slim, but Breast in Show definitely has a positive prognosis.

Musical Director Deborah Jacobson handily supports the actors with piano accompaniment that bounces and bellows. On reeds and horns, Dana Gardner helps one imagine how this will sound fully orchestrated when it translates to larger stages. Oh, yes, this is merely Stage 2.

If I had any criticism it would be the set design: all that pink glitter and the three gigantic breast cancer awareness ribbon cutouts serving as costume racks seem like overkill; the show sparkles enough on its own. Perhaps the idea is to hit you over the head with it, the way the Big C pummels its prey. But Zac Gilbert’s lighting design helps tone it down, and Frank Labovitz’s costume palette (pinks, grays, blues and browns, and black-and-white for the central couple) is inspired in its coordination.

Some of Chris Baine’s sound effects are funny, perhaps not as intended, and there’s some questionable product placement: Coca-Cola is allegedly a big supporter of the cause, although BPAs in its cans have been linked to, yes, cancer, not to mention its link to a host of other American-prone conditions. Applause for Properties Designer Daniel Mori for NOT using a Mac as the laptop prop — lately, that icon seems to carry its own baggage.

Another nit: Although Lutz performed it riotously, the song “My Oncologist” echoes too clearly “Who’s Crazy/My Pharmacologist and I” from the Tony-winning Next to Normal. Still, the lyrics are clever: “He’s aggressive with my disease … impressive with all those degrees … I love the way he treats me.” Then there’s that song “Normal.” Hmmm. Perhaps it serves as a tribute.

I welcome a second opinion, but mark my words, Breast in Show deserves 5 stars. It will move you. Time is running out. Get a move on.