If you are familiar with H.P. Lovecraft’s early writing about the fictional deity called Cthulhu, this play is hilarious. If you are not familiar with Lovecraft’s writing, take just a moment to look him up and you will be equally prepared. Lovecraft’s stories were often written in journal form. The entries included references to the supernatural and any one journal could contain totally unrelated fantastical stories. Steve Guttenburg, was a star in 1980’s whose films including Three Men and a Baby, Short Circuit, Diner, Cocoon, and Police Academy. 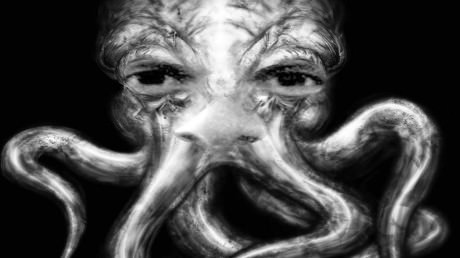 The plot of Call Steve Guttenberg at first is deceptively simple: three friends who operate a fly-by-night ad agency are awarded a contract for which they must deposit $37,000 in escrow. Unable to come up with the money, they steal one of Lovecraft’s journals and an other-worldly object.  They must also come up with the script and staging of the commercial within three days. Imagining that the opening shot should contain movie stars, they decide that Steve Guttenberg would be the most likely to agree to participate and place an unreturned call to his cell phone.

The introduction of one of Lovecraft’s mentee, Veronica, played by Tiffany Michael, begins twists and turns in the plot. I wish that Danny Pushkin, the writer and director of the play, had punched up her first appearance to make its purpose clearer to the audience.

Philip Reid and Andrew Zimmer give strong performances. Phillip Reid draws the majority of early laughs as the nerdy, shleppy member of the triad. His disposal of a potato chip when hearing the amount of escrow brought down the house. Reid’s later fascination with, and possessiveness of, the fictional journal about Cthulhu is charming and his attempts at deciphering it very funny.

Andrew Zimmer plays the strong, macho type who mesmerizes cast and audience with his zany portrayal of a robbery gone wrong that could have come straight out of one of Lovecraft’s journals. His no funny business attitude toward the group’s troubles is interrupted many times as he produces various illegal substances to relieve the group’s tension.

Domnique Marro, the third member of the group of buddies, and Tiffany Michael provide less sure-footed performances. At times it was hard to hear their lines.

All cast members were excellent in a fight scene choreographed by Joey Ebanez. Bodies clashed, swords clanged, and punches were thrown realistically.